The Black and White • June 16, 2018 • https://theblackandwhite.net/60249/sports/students-celebrate-stanley-cup-victory-at-capitals-parade/ 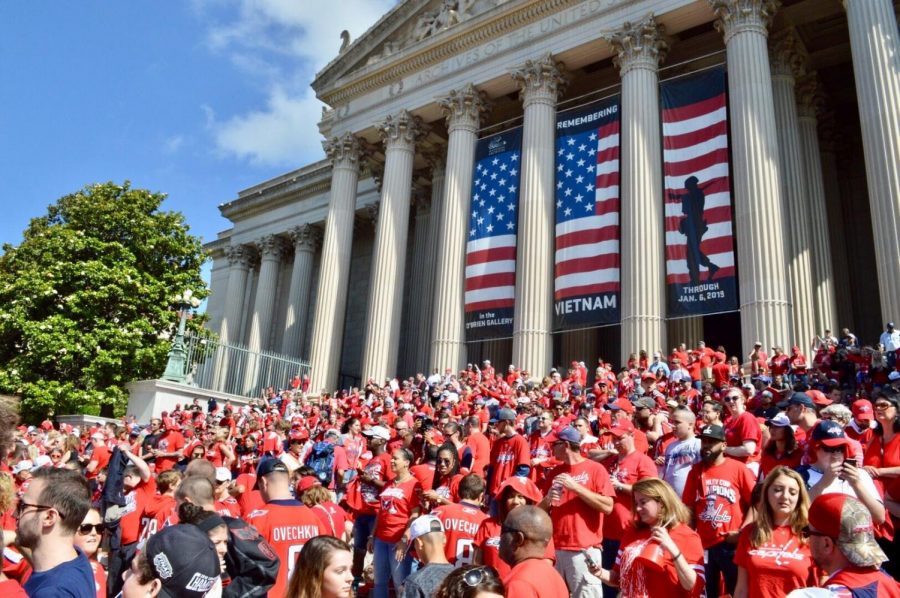 Hundreds of thousands of fans gathered in downtown D.C. Tuesday to celebrate the Capitals' first Stanley Cup victory. This marked the first Washington championship in 44 years. Photo by Alex Lewis.

Students joined hundreds of thousands of D.C. sports fans in the streets around the National Mall Tuesday to cheer on the Washington Capitals as they celebrated their first Stanley Cup victory. Surrounded by a sea of red, fans hollered and chanted as the players drove by in double decker buses, hoisting the cup into the air.

“It’s just amazing to bring victory home, and it brought a lot of hype to D.C.,” freshman Brielle Ohana said. “It really brings the D.C. community together.”

The Capitals have been a team in the NHL for 44 years and had previously been in the Stanley Cup finals in 1998, where they were swept 0–4 by the Detroit Red Wings. This victory marked the first time a Washington team won a championship since 1992, when the Redskins won the Superbowl, making this the first D.C. championship in any Whitman student’s lifetime.

For long-term Capitals fans who witnessed their team fail to meet expectations in the playoffs year after year, this victory meant a lot.

“It really affirmed how much this team means to me and how badly D.C. needed a championship team,” junior Lucas Kaplan said. “It was also incredible to see an all-time great athlete Alex Ovechkin finally prove the doubters wrong and reach the top of his sport.”

While the Stanley Cup drew in life-long hockey fans to celebrate, it also saw a rise in non-hockey fans who wanted to support their city.

“This win had an impact on everyone in the city whether you’ve been keeping up with the Caps for a while or if this is your first time watching hockey,” junior Alex Lewis said. “It was really awesome to see everyone kind of come together and rally around this team down the stretch.”