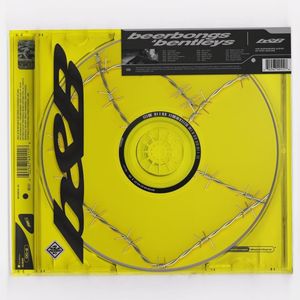 Post Malone has done it again. His latest album, “Beerbongs & Bentleys,” reached the top of the charts. “Beerbongs,” released April 27, broke The Beatles’ 54 year record for the most simultaneous top 20 entries on the Billboard Hot 100 songs chart with nine songs on the list. All 18 of the album’s tracks have also made it to the Hot 100, and rightfully so.

Many critics believed his debut album “Stoney” would be his 15 seconds of fame, but “Beerbongs” proved them wrong. Malone’s artful mixture of rap and R&B, coupled with his low, powerful voice, combine to create unique music. The album features many famous artists, including Swae Lee, 21 Savage and Nicki Minaj.

With his lyrics, Post makes it clear that he resents his fame, wishing he could make music without the spotlight. In his opening track, “Paranoid,” he reveals how he thinks people are manipulating him for his fame. It’s typical to hear music about partying and money, but when Post brings out his raw emotions, his lyrics become more heartfelt and sincere.

The album features fast tempo tracks like “Ball For Me” and “Spoil My Night.” In both songs, Post discusses his lavish lifestyle and details the excessiveness of his spending. Both the verses and the choruses have catchy rhythms and vocals that are easy to sing along to, making the album a party favorite.

Though the album has many impressive tracks, Post often stumbles over his words due to his strong voice and fast pace, making some songs harder to understand. Nevertheless, the album received well-deserved praise and exceeded listeners’ expectations.