The Black and White • June 3, 2018 • https://theblackandwhite.net/60045/uncategorized/brain-games-clubs-promote-competitive-academics/ 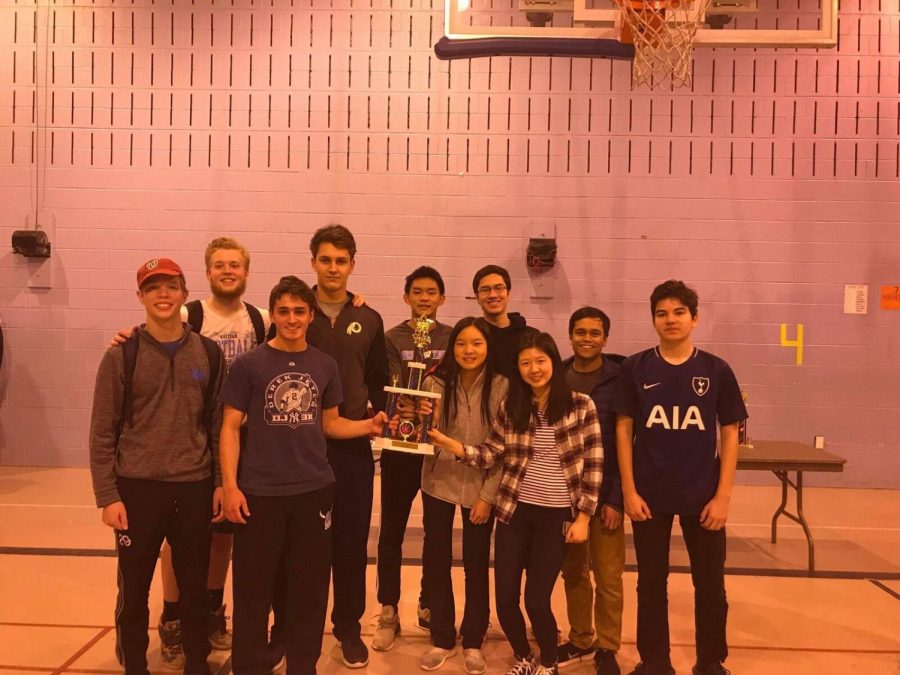 Junior Alex Chen sits at a chess table, the clock ticking down the seconds until his turn is over. The pressure rises as pieces are eliminated, until a final move finishes the game.

While many Whitman clubs are low-stress—offering an organized way for students to explore a hobby or support a cause —others are intense academic competitions. Chess club, Speech and Debate, Model UN, Quiz Bowl, DECA, Robotics and more provide an arena for students to exercise their mental muscles outside of school.

Chen has been competing in chess since 4th grade and finds that chess club is a great way to develop his skills by practicing with peers. Tournaments give him the opportunity to test the skills he’s worked on developing for the past ten years.

“You start with the same amount of pieces, but depending on the way you play, someone eventually wins,” Chen said. “You start equal, but someone will eventually get the upper hand.”

Sophomore Nate Olson participates in two of Whitman’s academic clubs: public forum debate, which he said helps develop his critical thinking, and Quiz Bowl, which tests him on a wide range of academic subjects.

“I really like trivia, and I have a lot of general knowledge, so I wanted to use that skill,” Olson said.

Freshman Sam Rahbin loves the realistic setting of the club. He joined because of his interest in geography, history and foreign affairs and has significantly increased his historical and political knowledge since then, he said.

Rahbin is also on the cross-country team and track team, both of which he said are similar to his experience in Model UN in terms of the high level of commitment.

“You need be pretty committed,” Rahbin said. “You really need to show up every week and practice your skills if you want to get better.”

Junior Thomas Fratantoni is a member of the Congressional Debate team—part of the larger Speech and Debate club—and DECA, a national competitive business and entrepreneur club. Fratantoni joined debate freshman year to improve his public speaking skills and has since grown exponentially, giving a TedX talk in front of hundreds of people this year.

All of these clubs have been wildly successful in competition. Chess club has won states two years in a row, while DECA placed third at states this year and Fratantoni placed second at the International Career Development Conference. In Speech and Debate, tens of students qualified this year for major national tournaments, with seniors Elisa McCartin and Rhabhya Mehrotra coming in second at the Tournament of Champions.

Fratantoni has met some of his best friends through these clubs. Although academic competitions can be stressful, Fratantoni thinks the team creates a comfortable atmosphere.

“We are such a close tight knit group, and it’s great to know everyone there,” he said. “Not just know their name or know their face, but to actually know them as a person.”