The Black and White • June 1, 2018 • https://theblackandwhite.net/60019/news/media-center-scurries-into-new-computer-mice-policy/ 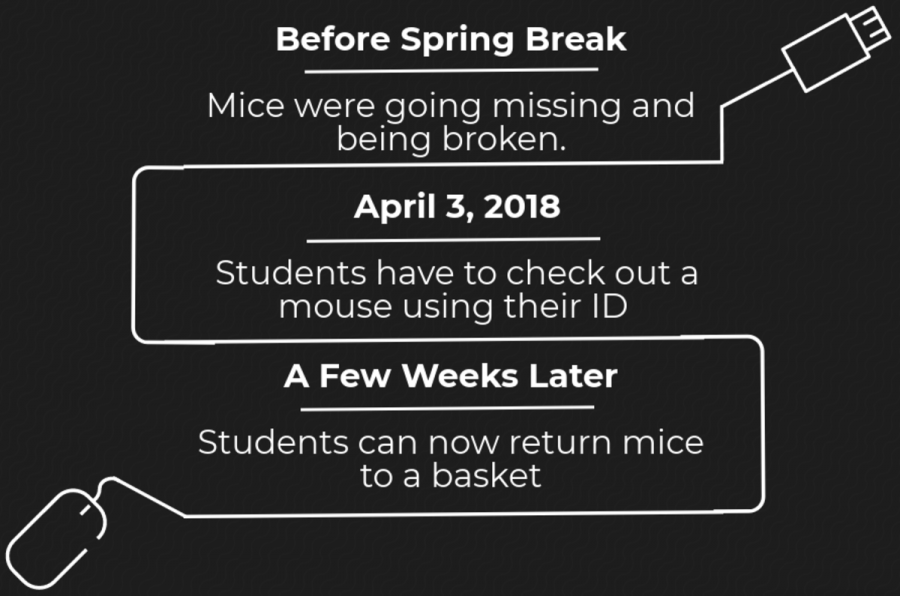 After a string of mouse incidents, one would expect the MCPS exterminating team to be swarming the media center. Instead, students will have to go in search of mice for themselves.

Media center specialists implemented a computer mouse rule when they became aware of a mouse shortage before spring break; a few students told them that there weren’t any mice at the computers they were working at, and later librarians noticed that some mice were deliberately being destroyed.

“Computer mice had been either going missing or were being broken, where the top had [been] taken out, they were being gutted and the shells were being left at the computers,” media specialist Alexis Mazur said. “It wasn’t one or two times, it was in the double-digits plus.”

They decided to take action April 3 after a month-long period of finding an average of three mice per day missing or broken, said Whitman IT specialist Oriole Saah. Students must now check out a mouse by entering their ID into a computer system and return it to a bin before they leave.

Before Saah proposed the change, the corded mice were simply kept at computer stations throughout the day. The problem has spread to other areas of the school including the computer labs. Because mice stay at their stations in the labs, teachers need to be more responsible for mice when they take their class to a lab, Saah said.

Freshman Ziad Charafeddine agrees with the new policy but feels that everyone shouldn’t have to follow the same rule, he said.

“It’s a good policy because people aren’t really stealing mice anymore, and I think they’ve got it down where it doesn’t take a lot of time,” Charafeddine said.

For the most part, the change has been successful. Since the implementation of the new rule, only two mice have gone missing or been damaged, and the students with the mice under their accounts will have to pay $15.75 per mouse damaged or missing.

The rule will likely be eliminated for the beginning of the 2018-2019 school year but will be reinstated if problems continue to occur.

“I’m hoping that it’s, for a lack of a better term, a maturity problem for some kids because it’s not 2,000 students who are doing it,” Mazur said. “But when it happens more than 10 times, you do need to address it.”