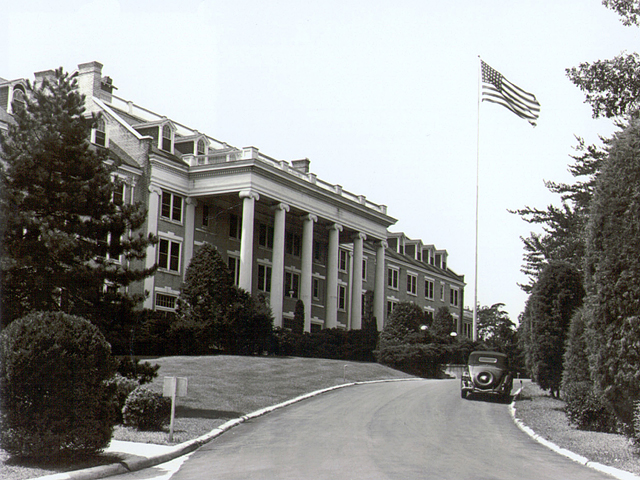 Arlington Hall in Virginia, a former girl’s preparatory school, was converted for Army use during WWII. Joan and her co-workers cracked Soviet codes at the Hall during the Cold War, and the Hall is now home to the George P. Shultz National Foreign Affairs Training Center. Only Joan's first name is used in the story and a photo of her was not provided for privacy reasons. Photo courtesy Wikipedia.

For privacy reasons, Joan requested that the Black & White use only her first name in reporting this story.

On a cold winter morning in 1953, the early days of the Cold War, Joan and her co-workers waited for the bus, like many others across the country. The unmarked vehicle picked them up in a spot different than the previous morning’s and transported them to a nondescript, massive building six miles outside of the District of Columbia. At the end of the shift, they’d learn the next day’s pick-up spot.

Joan—the grandmother of a Whitman student—spent three years working in that building, passing security checkpoints every morning to gain entrance to her cubicle, where baskets of paper scraps covered with Russian code waited. It was there, within the cream-colored façade of Arlington Hall, the Army codebreaking facility, that codebreakers translated Soviet ciphers for the National Security Agency.

Those codebreakers were prohibited from speaking about their work for 50 years after the fact, so Joan has been free to talk about her experiences for the last 10 years.

A few months before that chilly morning, Joan had graduated from Boston University, where federal agents had interviewed every person in her undergraduate Russian class.

“They never told me who they were,” Joan said. “Turned out, it was the NSA.”

Students didn’t know what the interviews were for, let alone that the NSA was conducting them, but the agents offered Joan, who was by then fluent in Russian, a job in the District translating Soviet code.

The process was tedious: at the beginning of shifts at Arlington Hall, codebreakers were given up to 50 slips of paper, each with five Cyrillic letters and breaks in between each sequence. The code itself wasn’t difficult—every letter was simply substituted for another letter along a set pattern—but it changed constantly. They translated on two fronts, figuring out which letters had changed and then putting the whole sequence into English.

Codebreakers started by looking for the Russian for “I give” or “I send,” which most messages started with and looked for recognizable names or places to decipher more letters (Joan loved messages that included the word “Warsaw,” because it was bookended by two of the same letters and allowed her to crack three more). The more they knew about Russian culture and current events in the Soviet Union, the better they could make connections and figure out the code.

“That was it; you just sat there all day figuring out, ‘Does this make sense?’ You watched for sentence patterns because it had to be a sentence, even though the letters had been changed,” Joan said. “Being good at crossword puzzles and things like that was a pretty good thing, and having a pretty strong Russian vocabulary and sense of the grammar and the sentence structure was important.”

The workplace itself was secretive; codebreakers were discouraged from sharing information with each other or forming relationships. Each worker had their own cubicle, the confines of which dictated the workplace atmosphere.

“There were certainly 50 people on my floor, but you weren’t supposed to talk to each other,” Joan said. “Because we were surrounded by this shroud of secrecy, you liked the people you worked with, but you didn’t really know them well, and you didn’t develop too many friendships or long-term relationships. People tended to get moved around a lot.”

The NSA also offered a job to Joan’s husband, a fellow BU student, when they recruited her. His posting was different than his fiancée’s job in the District; as an intercept operator, he was stationed in the British Zone of divided Berlin, intercepting Soviet messages for codebreakers like Joan to decrypt back in the U.S.

Because of the secretive nature of their work, Joan and her husband couldn’t discuss the specifics of their jobs with each other. Although they shared stories afterwards—Joan recounted that her husband, who wasn’t good with directions, once mistakenly transmitted a message that a Russian platoon actually in Finland was entering Paris—at the time Joan didn’t even know what her husband was doing for the NSA.

After three years working for the NSA, Joan’s husband returned from his posting, and they moved back to Boston. She got a degree in library science, became a housewife and then worked as a librarian in the local school system. She and her husband became parents, then grandparents, but the secrecy around their former jobs remained.

“My husband used to tell people that he used to be a Morse code transmitter, but nobody ever really asked me, and I never really volunteered the information,” Joan said.

The aura of secrecy was so strong that even 60 years later—10 years after the mandatory 50-year waiting period for discussing such classified information had lapsed—other former codebreakers whom Joan met later were still reluctant to discuss their old work.

In fact, Joan’s most exciting memory from her tenure as a codebreaker involved such unspoken codes of conduct. One night, she recalled, there was an important breakthrough, and another codebreaker stood up in their cubicle, shouting “I got it!” The lights dimmed and Joan heard a roar: NSA cars leaving the Hall, driving to the White House or the Pentagon to address whatever urgent secrets the translated message had revealed.

“We were never even supposed to have noticed that it happened, but we weren’t stupid. We were curious, but whoever found it never admitted,” Joan said. “Those few years were very interesting.”