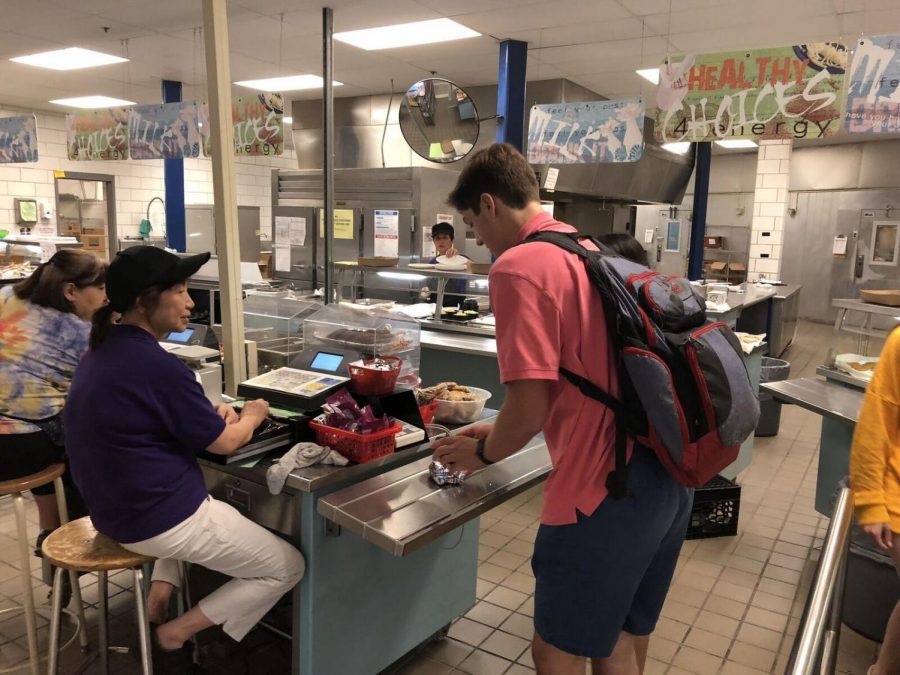 Students buy snacks from the cafeteria during lunch. MCPS received a C-plus grade for its food selection in a report released May 8. Photo by Max London.

Local non-profit Healthy School Food Maryland gave MCPS a C-plus grade for its cafeteria food in 2017 in a report released May 8. This is the second year that the organization has issued a report: last year, MCPS received a C.

Healthy School Food Maryland annually grades all 24 counties in the state. Grades are based on factors like healthy vending machine options, menu variety and food label transparency; a 48 is the highest possible grade. While MCPS’ numeric score rose from 21 to 25 this year, other counties improved more significantly.

“There was a 56 point increase this year, so it’s absolutely clear to me that districts are striving to increase their grades,” Healthy School Food Maryland overseer Lindsey Parsons said. “The highest point increase was 12 points, and it takes a lot of work to make that kind of change.”

Much of MCPS’ improvement is due to changes made after the 2016 report, such as increasing regulations on meat additives. The county wants to continue the upward trend: starting next year, school cafeterias will ban artificial colors and dyes from all food, MCPS director of Food and Nutrition Services Susan McCarron said.

“There are a lot of challenges inherent in the school system food program, which I think are not always recognized or fully understood,” Montgomery County Food Council Executive Director Heather Bruskin said. “I think MCPS has made great strides in changing its offerings over the years, increasing transparency and the changes that they’ve made around additives and food coloring.”

For some students, the C-plus grade reflects the need for more change. But because Healthy School Food Maryland doesn’t visit any schools when it makes its decision, McCarron doesn’t think the grade is indicative of poor performance.

“I don’t think the grade adequately represents the job that our food division is doing,” McCarron said. “They only check our website and menus, so they don’t necessarily see the improvements going on in our cafeterias.”

Parsons, however, doesn’t see a school visit as necessary to critique cafeteria policies. For example, the organization recommended that MCPS prohibit logos on school property for companies that primarily sell junk food, but the change was never made, Parsons said.

Another important factor that districts were judged on was the presence of salad bars, which are currently only available at some MCPS schools. Whitman has a few vegetable choices rather than a full salad bar, so the selection is limited, freshman Kailin Flowers said.

Starting next year, MCPS is adding a vegan salad as an option for schools with salad bars and is proposing further vegetarian and vegan-friendly menu items like beans, quinoa and other vegan proteins.

“People with dietary restrictions should be able to eat from the cafeteria if they forget their lunch,” freshman Maayan Harris said. “I think that this an awesome thing for the cafeteria to do.”