The Black and White • May 27, 2018 • https://theblackandwhite.net/59903/news/district-16-state-delegate-primary-an-inside-look-at-local-candidates/

District 16 state delegate primary: an inside look at local candidates 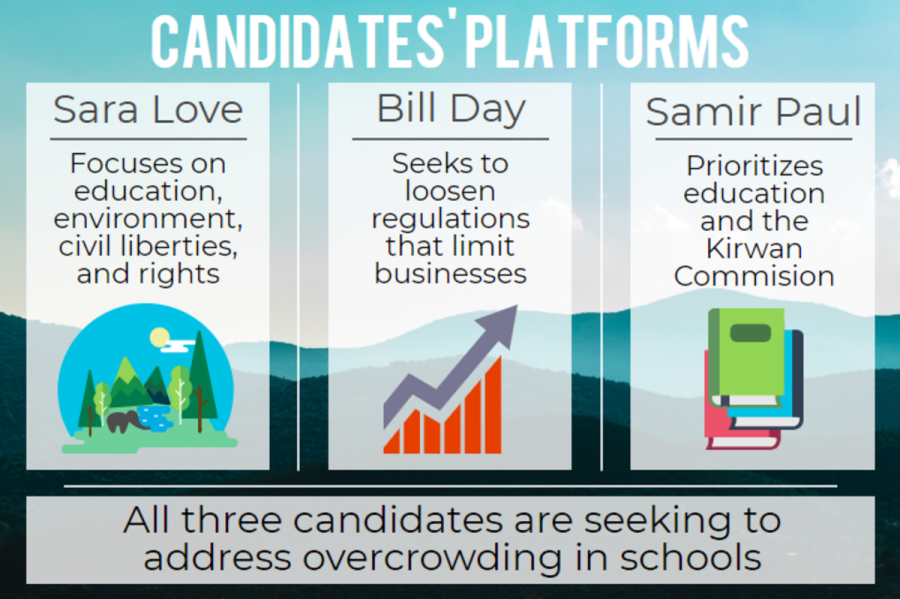 As the June 26 primary election for the District 16 delegates approaches, three candidates from the Whitman area are ramping up their campaigns for the three available seats in the Maryland House of Delegates.

Sara Love, 51, is a Democrat and single mom with a sixth grade son at Pyle and ninth grade daughter at Holton Arms. Love practiced law concerning civil and reproductive rights until 2004 and previously served as the general counsel for NARAL Pro-Choice America. She was also the policy director for the ACLU of Maryland, where she advocated for topics ranging from access to birth control to criminal justice reform.

Even before Love held these high-profile jobs, she knew she wanted to go into politics.

“It really started when I was seven,” Love said. “I told my mom that when I grew up I wanted to help people: I was going to become a lawyer and I was going to run for office. My whole life has been working for social change.”

Love’s campaign is centered around the same themes she was passionate about as a child. It emphasizes social change and focuses on three priorities: education, the environment and civil rights.

It’s been challenging to balance being home with her kids and life on the campaign trail, but the experience has been like no other, Love said.

“A campaign is a really interesting series of highs and lows,” Love said. “There are times where you just get really down, but the highs are also really incredible. It’s those little moments where someone does something for you unexpectedly.”

Samir Paul, 29, is a Democrat, the son of two Indian immigrants and a computer science teacher at Montgomery Blair High School. Originally from Montgomery County, Paul teaches in the same classroom where he was once a student. After graduating from Harvard in 2010, Paul taught in a low-income high school in D.C. where he started the only AP computer science class in D.C. Public Schools. He worked on Obama’s 2012 presidential campaign in Wisconsin and later became a tech consultant for IBM before returning to Blair. In 2016, he was named Montgomery County’s Rising Star Teacher of the Year.

Paul’s main priority is education. He decided to run for office in response to the 2016 establishment of the Kirwan Commission: a panel of various representatives from throughout the state specifically created to determine the policies and funding for Maryland public schools, plans that are often changed only every 10 or 20 years. Paul hopes to pay an instrumental role in the Commission’s decisions in the next few years.

“Young people in schools today have spent their entire academic career in the shadow of the last time we did this work 15, 16 years ago,” Paul said. “We have to get it right in the next two to three years because a whole other generation of students is going to grow up facing the consequences of the decisions we make about what our schools should look like and whether we are going to do right by them.”

Along with advocating for improved educational standards and increased funding for public schools, Paul hopes to encourage economic growth, pass stricter gun control laws and protect the environment. He believes his young age and years of tech experience make him best equipped for the job.

Bill Day, 45, is a Whitman parent and the only Republican running for District 16. Day graduated from the Naval Academy in 1995, served in the Pentagon and Naval Reserve and now works as a lawyer at his own practice, the William Day Law Group. His firm is centered on business law, estate planning and intellectual property.

Day hopes to work alongside Governor Hogan to promote economic growth by limiting business regulations. He was motivated to run for office after reading a Washington Post article about Montgomery County’s growing $50 million annual deficit and net migration out of the county.

“I hope that we can follow some of Governor Hogan’s initiatives at the state level and work with him to let people know that we are open for business,” Day said. “We are making this a good place where you can start businesses, where you can move your businesses over here.”

In addition to his economic plans, Day hopes to decrease overcrowding and improve school safety. Day has three kids attending local schools, including a fourth-grader at the Little Flower School, a freshman at Holy Cross and a senior at Whitman.

Although District 16 has a history of electing Democratic delegates, Day remains hopeful that voters will support him for his economic policy and willingness to work on a bipartisan basis.

“I’m working with two people with diverse views, and trying to get them to come up with a resolution,” Day said about a current litigation project. “I would do that in the state legislature to work across the aisles. I would work with all sides.”