The Black and White • May 15, 2018 • https://theblackandwhite.net/59762/news/whitman-honors-retiring-staff-in-outdoor-ceremony/ 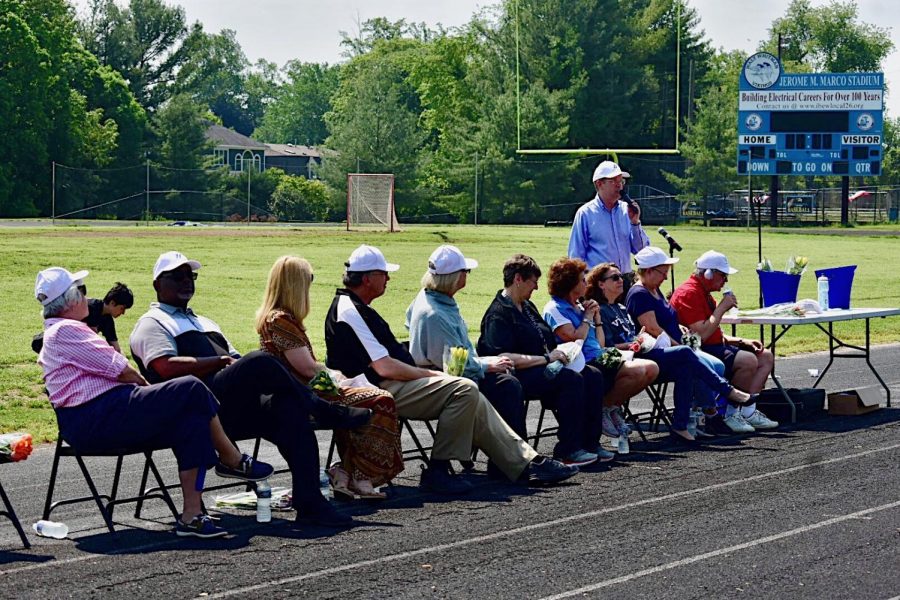 Whitmaniacs honored retiring teachers and administrators, including principal Alan Goodwin, in a ceremonial pep rally May 15. Goodwin is retiring this year after 15 years at Whitman. Photo by Hunter Hulsebus.

Whitmaniacs held a pep rally during a double 4th period May 15 to honor principal Alan Goodwin, assistant principals Jerome Easton and Kathryn McHale and 10 other staff members who will be retiring at the end of the school year.The ceremony, held in the Jerome Marco Stadium, included speeches from students and a duet from seniors Theo Akpinar and April Ginns; there was also a brief performance by Drumline.

Before the ceremony, students applauded retiring staff members as they walked into the stadium through an aisle created by students and cheerleaders.

MCs Olivia Matthews and Ray Crist described how the retiring staff members had contributed to their positive four years at Whitman and the legacy Goodwin will leave behind.

“You showed me, among many other students, a level of kindness and compassion that has gone unmatched, and I know that we are all always grateful,” Matthews said to Goodwin during her speech.

“Dr. Goodwin’s been here for 14 years, and he’s really put through a message of kindness, an open-door policy, really making sure that people feel welcome,” Kulenkampff said. “I’m brand new, and [all the administrators], they’ve been nothing but welcoming [and] caring.”

Goodwin is grateful for the outpour of support from the Whitman community and hopes that the empathy he showed as principal can serve as an example to students.