The Black and White • March 19, 2018 • https://theblackandwhite.net/59114/sports/danger-on-our-turf-is-mcps-protecting-athletes/

Danger on our turf: is MCPS protecting athletes? 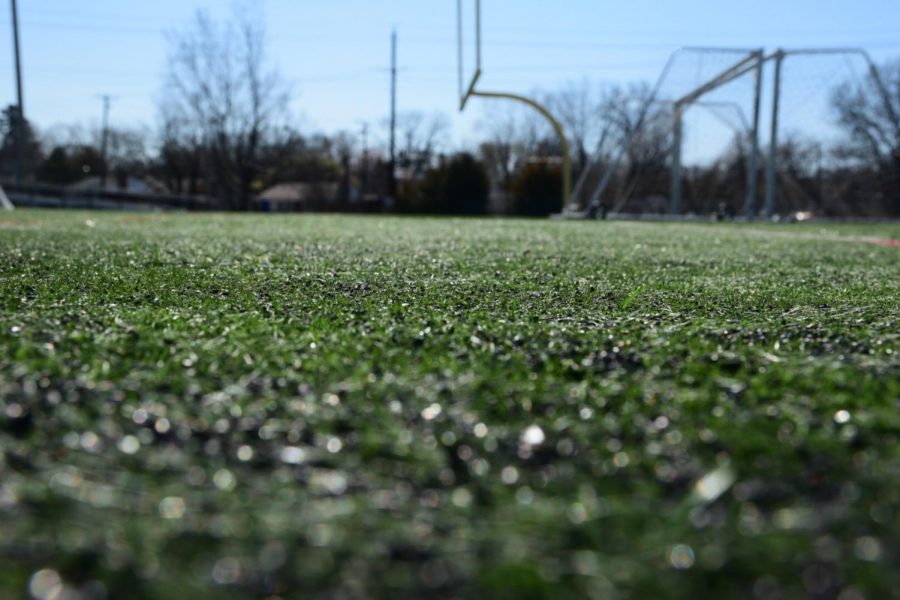 In 2008, MCPS installed their first turf field at Richard Montgomery High School. Their contractor told them they were getting “breakthrough” technology and touted “unmatched durability” against wear—the “safest system you can buy,” as described in company sales pitches.

A major player in the international turf industry, FieldTurf has been forced to replace one MCPS high school’s field three years ahead of schedule “to assure the safety of athletes,” because the carpet on the field was “deteriorated” and “heavily worn,” according to a January 2017 Montgomery Parks department press release.

FieldTurf, for its part, stands by the safety of its fields.

Over the past decade, MCPS has replaced some of its grass fields with artificial turf because it offers increased field-time and durability, MCPS athletic director Jeffrey Sullivan said.

Whitman, along with Einstein High School and Julius West Middle School, is in line to get a turf field this summer. The Montgomery County Council approved $4.9 million to fund construction of the fields; Montgomery Soccer Inc. agreed to cover $4.2 million of the cost in exchange for 1,000 hours of field time per year over a 10-year period. The Whitman All-Sports Booster Club will contribute an additional $300,000 to the school’s project.

FieldTurf is among the bidders in the district’s open bid process, McShane confirmed.

Meanwhile, tests at two of the current turf fields have revealed spots that at times have been worn to the point of being deemed unsafe for athletic competition, per MCPS and industry standards. Continued use of the fields has raised concerns over the validity of MCPS’s testing protocol and whether MCPS is doing enough to ensure the safety of athletes.

In 2005, FieldTurf started selling fields made of Duraspine fiber, which they marketed as a breakthrough product that would last at least 10 years, according to sales pitches cited in the class-action suit. FieldTurf sold at least 1,450 Duraspine fields all over the country between 2005–12, the lawsuit states, including the field at Montgomery Blair High School.  Two other MCPS fields—at Richard Montgomery and Walter Johnson High Schools—are made of FieldTurf Duraspine fiber as well.

FieldTurf stopped selling the Duraspine fields in 2012 after complaints over the durability of the fields, according to the lawsuit.

The class-action lawsuit against FieldTurf came in the wake of national criticism following a 2016 investigative series titled “The 100-Yard Deception,” written by NJ Advance Media, a content provider for newspapers across New Jersey and Pennsylvania. The piece alleged that FieldTurf knew about the defects with the Duraspine fiber but continued to sell the fields anyway.

FieldTurf denied the allegations in the NJ Advance Media story, saying that concerns with Duraspine never compromised field safety and only affected some fields.

“There is not and has never been any issue with the safety of these fields for playing on,” FieldTurf CEO Eric Daliere wrote in an open letter late 2016.

In 2011, the company sued their supplier for defects in the manufacture of the Duraspine fiber. Daliere said in the open letter that the defects only affected “how a field looks over time in certain UV environments,” particularly in the Southern and Southwestern regions. However, many organizations that have joined the national suit against FieldTurf—including Montgomery Parks—are not located in high UV environments.

From the sale of these Duraspine fields, FieldTurf made an estimated revenue of $570 million, mostly at the expense of taxpayers, NJ Advance Media reported.

Blair was forced to replace their Duraspine field, owned and overseen by Montgomery Parks, three years earlier than expected after it failed a safety test midway through the fall sports season in October 2016. The field was still under warranty, Parks director Michael Riley wrote in a letter April 5, 2017, though it wasn’t clear at the time how much—if any—the company would pay for the “approximately $725,000” replacement. A Jan. 27, 2018, NBC4 report cites an unnamed “official” as saying the replacement was billed to taxpayers, but The Black & White was unable to verify this report. Montgomery Parks joined the class-action lawsuit against FieldTurf in January 2018.

MCPS, which owns all other turf fields and will own Whitman’s, is currently monitoring the conditions of its fields and will join the lawsuit if it becomes necessary, MCPS spokesman Derek Turner said in a phone interview Feb. 28.

Athletes say the fields at Richard Montgomery and Walter Johnson have more visible patches of exposed crumb rubber pellets than other turf fields. The suit against FieldTurf alleges that Duraspine fibers shed from the field during normal use, meaning they hold infill less effectively, as can be seen by these exposed patches. Infill is more easily moved around and off the field, compromising the safety of the turf.

Tests at the Richard Montgomery and Walter Johnson fields have revealed both to be potentially dangerous to MCPS athletes per industry standards. Still, MCPS continues to allow athletic competition on the fields, leading some experts to question their testing procedure and standards for turf safety.

One important measure of turf field safety is the GMAX level test, which measures shock absorption and intensity of impact when an athlete falls on the field. The higher the GMAX level is, the less shock the surface absorbs and the more dangerous the field is for athletes—specifically in terms of knee and head injuries.

Turf infill is intended to soften the playing surface, cushioning the concrete base underneath. When the field is used, the pellets are displaced from high traffic areas and the GMAX levels there increase as the layer of shock absorption between player and concrete is thinned.

GMAX levels above 200 can be life threatening if a player hits their head on the field, according to Penn State’s Center for Sports Surface Research.

The Synthetic Turf Council, an industry trade association, recommends a standard maximum of 165, which is also used by the NFL and Fairfax County. For reference, the average natural grass field has an equivalent GMAX rating of 90, Maryland SoccerPlex states on its website. Yet the MCPS standard for GMAX is anything below 200.

“When you see something that looks like grass, you think you can play on it,” said Gastón de los Reyes Jr., an assistant professor of strategic management and public policy at George Washington University. “But if the GMAX levels are above 200, then it might be closer to playing on concrete, and that’s when you get the risk of head and knee injuries.”

In October 2016, Athletic Field Consultants, Inc., a company subcontracted by FieldTurf, tested Blair’s field during a mandated biannual test. GMAX levels on the field measured over 200 in multiple areas, a report published by the Montgomery County Parents Coalition revealed. Initial repairs were made before play resumed, and the field was replaced in 2017. However, it’s likely that students played on the field while the levels were still unsafe: the Blair Blazers had played a home football game just three days before the test.

“Current guidelines for GMAX have a limit of 200, but we are well, well below that limit. That’s a threshold limit and all our fields are well below that,” county athletic director Sullivan said in a phone interview. “We follow MCPS standards and make sure our levels are well in compliance with those testing standards.”

MCPS doesn’t own the Blair field, but its fields suffer similar issues. Tests in the summer of  2016 on the fields at Richard Montgomery and Walter Johnson revealed that both had average GMAX ratings around 180 with multiple spots at Richard Montgomery registering well over 200, according to reports by the companies FieldTurf contracted to test the fields. One spot at RM registered over 250—significantly higher than the threshold for life-threatening. This information was first published in an Aug. 16, 2016, Forbes article and a Nov. 2, 2016, Bethesda Magazine article.

Instead of immediately replacing the fields like Montgomery Parks did at Blair, MCPS waited to have the fields retested. The turf tester noted in his report that maintenance crews added rubber infill to high-use areas and groomed the fields immediately prior to tests. Resulting average GMAX levels dropped close to 30 points at each site.

Though he has not been involved in MCPS fields, de los Reyes expressed concern about this testing method.

“We also want to know what the field was testing at before you went to do your test,” de los Reyes said. “That would show what children are actually exposed to so they should know what the test number revealed before they added the infill.”

A FAQ on turf fields posted on the MPCS website states, “areas reading close to 200 in GMAX will be monitored and rejuvenated as needed by de-compacting infill and adding infill mix to increase depth.”

While this process can lower GMAX levels temporarily, if a field has GMAX levels in the 250s in some areas, like Richard Montgomery had in 2016, simply adding infill can’t bring down those levels for any length of time, said Buzz Splittgerber, owner of Idaho-based turf testing company BuzzTurf. Especially on a high-use high school field, the infill is going to get moved around very quickly, creating an inconsistent surface, he said.

“I’ve never seen a case like that, and I’ve tested a lot of fields. When it gets to be that high [then] the turf is worn out, so the infill material itself just doesn’t stay in,” Splittgerber said in a phone interview.

Splittgerber has not tested any Montgomery County fields.

Ryan Teeter, who administered the June 2016 test of the Richard Montgomery field, corroborated this view in an interview that year with Bethesda Magazine. Teeter said in the interview that the grass fibers are responsible for holding the crumb rubber infill in place, and if the fibers fail, which Teeter said they had, the field can quickly deteriorate.

In any case, both Duraspine MCPS fields are dangerously close to—if not over—even the weakest of standards.

“Any ratings close to 200 should be cause for concern and should not be considered to be safe,” Splittgerber said in an email. “In my opinion, accepting average readings of 199 is not safety first.”

For MCPS athletes, what happens next?

MCPS will install a turf field at Whitman in the near future. Installation is planned to start immediately after the spring sports season, county athletic director Sullivan said. FieldTurf has submitted a bid for the field, sales representative McShane confirmed. FieldTurf no longer uses Duraspine technology.

Asked if FieldTurf remains a serious contender for the new contract, MCPS spokesman Turner replied: “MCPS has a formal bid process for fields where any qualifying vendors can submit their bids. No announcement has been made about who will receive the contract at this time.” MCPS has offered no public indication of concern over FieldTurf itself and has not yet followed Montgomery Parks in joining the class-action lawsuit against the company.

“FieldTurf has installed a lot of successful fields across the country,” Sullivan said.

The MCPS Board of Education has twice delayed awarding a contract for the three fields. In anticipation of the new turf field, Whitman’s Bermuda grass field never underwent its regular winter maintenance. Since the turf won’t be installed until summer, Whitman’s spring athletes will now be forced to play home games on the grass anyway. Sullivan said the field will be ready for play in time for the spring season.

MCPS athletes will spend hundreds of hours playing on the two fields this spring. Given ongoing lawsuits, defective technology and weak testing standards, their safety is questionable at best.

Tiger Björnlund and Sam Shiffman contributed to this report.