Despite 50 years of progress, tensions from 1968 remain 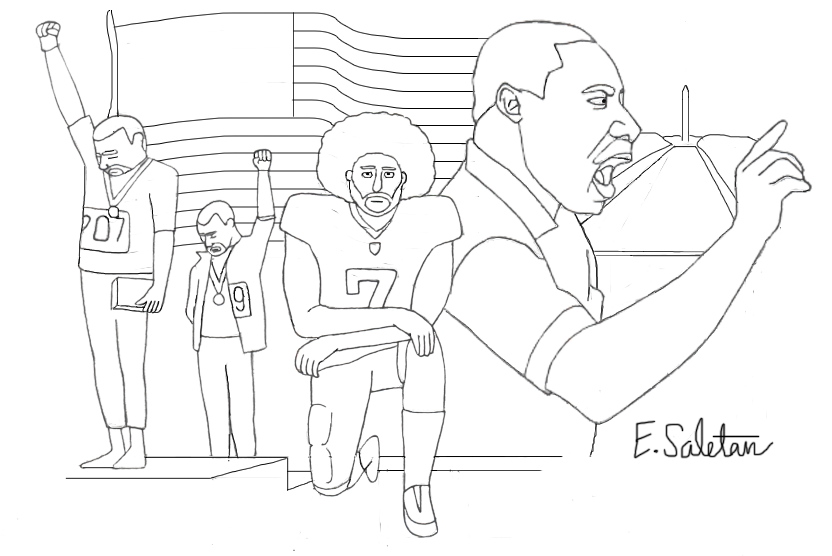 1968 saw the first-ever national anthem protest, the assassination of Dr. Martin Luther King Jr. and growing unrest towards U.S. involvement in the Vietnam War. 2018 has seen the continuation of some of these tensions: athletes are kneeling during the national anthem, the Black Lives Matter movement is growing and people are protesting the Trump administration.

Despite a 50-year difference, both 1968 and 2018 have brought deep racial tensions and new waves of political activism to the country. These striking similarities have prompted a belief in many, both in the Whitman community and across the country, that the country’s racial divide is perhaps larger now than 50 years ago.

In early 1968, Whitman’s gym housed a concert with performances from the Marvelettes, Wilson Pickett and Martha and the Vandellas. Groups of African Americans from D.C. unexpectedly arrived at the event, hoping to catch a glimpse of the performers. Many white attendees and homeowners were aghast at their arrival, so much so that some even called the police, Kenny Appelbaum (‘69) said.

Like today, Whitman was predominantly white in 1968: fewer than 20 black students attended the school, which had more than 1,000 students. Though white students far outnumbered minorities, 13 alumni of both races say they believe racism was nearly nonexistent among the student body.

“I never had an incident where racial insults or disrespectful acts or language were made towards me, nor can I recall any of the other African Americans in the school having any negative experiences,” Philomena Green Morsell (‘69), who was one of three black students in her graduating class, said.

But outside of the school, discrimination was the norm: African Americans and Jews weren’t allowed to live in certain neighborhoods, housing contracts prohibited whites from selling their homes to those of other races and parents discouraged their children from socializing with minorities.

“It was understood that we were better and they were worse,” Victoria Crawford (‘69) said. “It was very clear that it wasn’t okay to be black and to date someone of a different race.”

These tensions escalated after Dr. King’s assassination in April 1968. Protesters torched D.C. businesses and raided shops, much like the 2015 riots in Baltimore following the death of Freddie Gray. Alumni recall seeing the flames from their homes, and police prohibited Maryland residents from leaving the state during the chaos. King’s assassination shocked the country, filling Whitman with a sense of horror among staff and students the following day.

It started with disbelief, next sadness and then anger,” Morsell said of the assassination. “Martin Luther King gave us a voice. He was fighting in a peaceful way for our rights as American citizens. He was our voice, and that voice was silenced by hatred. That unwarranted hatred was and still is the cause of our anger.”

For Rep. John Lewis (D-GA), a colleague of King’s who walked with him in his historic march from Selma to Montgomery, AL, the assassination was shocking and painful. Though society has changed significantly since the assassination, Lewis sees a parallel between now and then.

“Racial tensions in 1968 weren’t much different from the racial tension of 2018,” Lewis said.

This issue was evident in the Whitman community this year when freshman Brian Ellis shared in a schoolwide assembly that he was called the N-word by his peers on multiple occasions. Ellis said he also faced racial bias from teachers and students at Pyle and added that he “never experienced this type of racial hate” when he lived in places like Chicago and Memphis. Despite these issues, not all minority students have shared Ellis’s negative experiences; some feel Whitman is an inclusive community, like in 1968.

“For kids that come from a minority background, everybody in the school is very welcoming towards us,” junior Nick Boone said.

Activism in the Community

As the Star-Spangled Banner played during the 1968 Summer Olympics in Mexico City, the world watched as American track and field stars Tommie Smith and John Carlos raised their fists in the air, protesting the prevalent discrimination against blacks in America. The athletes received mixed reactions to their protest, including death threats.

Similar anthem protests are common today, as athletes across the country, like former 49ers quarterback Colin Kaepernick and Redskins wide receiver Jamison Crowder, knelt during the anthem to protest racial inequality and police brutality. The response has been similar to 1968; Americans are still divided as to whether the protests are an example of freedom of speech or a sign of disrespect towards the armed forces.

The protests became local last fall, when many Montgomery County athletes, including Boone, a football player, knelt during the anthem before sporting events.

“I wanted to kneel because there are a lot of racial problems, and I felt doing it at Whitman made it show that we’re all one,” Boone said.

Student activism in 1968 largely centered around the country’s involvement in the Vietnam War, as many were at risk of being drafted. Back then, students often faced opposition from their administrators; today administrators strive to be more supportive. Still, political groups are restricted from spreading their full message: administrators recently prohibited the Vikes for Action club from selling “Vikes Stand with Planned Parenthood” t-shirts on school grounds.

“We always have to be careful that when we present a point of view, we have to present another,” principal Alan Goodwin said.

Over the last 50 years, the country has made many steps toward racial equality. Barack Obama’s election as the first African-American president and legislation to decrease housing discrimination, among other efforts, have helped ignite progress in the fight against racial tensions in the U.S. Still, many of the issues the country faced in 1968 remain startlingly prevalent.

Recently, the country has witnessed an increased unity behind political activism,  generating mass forms of protest, including the Women’s Marches. Just like in 1968, with the increase in tensions comes an increase in activism, and the activism doesn’t appear to be slowing down anytime soon.

“The times that we’re in right now where we demonize other groups doesn’t serve any of us, so I think there’s a parallel,” Crawford said. “Back then, the division was deeper and quieter. Now it’s more visible because we have the media, TV and activism.”