Amazon Books to open in Bethesda this summer 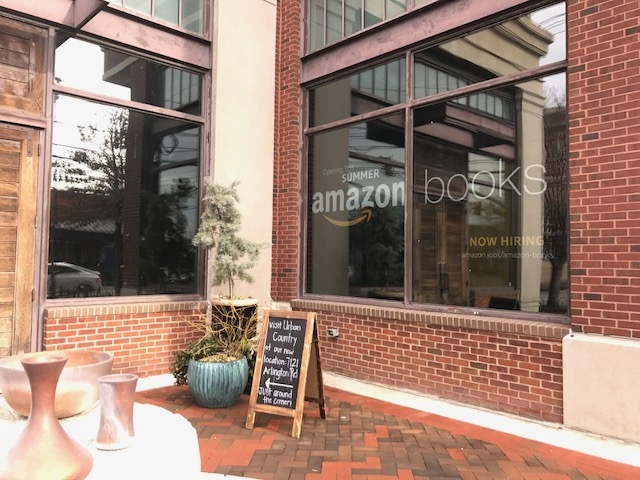 An Amazon Books sign hangs in the window of Urban Country. The store will open this summer. Photo courtesy Bethesda Beat.

Bethesda will welcome an Amazon Books store this summer. The store will be the company’s 14th location in the country.

The store will replace furniture store Urban Country at the corner of Bethesda Ave. and Arlington Rd. It will stock books based on Amazon.com customer ratings and sell Amazon products, like the Amazon Echo and Kindle.

“We knew that the Bethesda community embraced having a bookstore at Bethesda Row for the past 20 years,” said Chris Weilminster, executive vice president of Federal Realty, which manages the Bethesda Row property. “When it was decided that Barnes & Noble wouldn’t be staying, we focused efforts to secure a suitable replacement.”

The store uses technology to determine which books to sell. Greater Bethesda Chamber of Commerce President Ginanne Italiano thinks the addition of a modern bookstore is good for Bethesda, she said.

“Obviously the Chamber of Commerce is very excited about Amazon opening up a bookstore here in Bethesda,” Italiano said. “This is the way bookstores are going. I’m glad that there’s going to be a real brick and mortar bookstore in downtown Bethesda.”

The Bethesda Barnes & Noble store’s closure earlier this year marked the end of a main attraction for many teens, something that Amazon Books hopes to bring back to the community. Some students, however, believe the bookstore won’t bring anything new to Bethesda, a concern voiced by junior Ethan Askarinam.

“Since Barnes and Noble isn’t there anymore, all those memories from elementary and middle school are gone now,” Askarinam said. “So I don’t think it’ll be able to replace the essence of Barnes and Noble.”