The Black and White • March 1, 2018 • https://theblackandwhite.net/58815/feature/hallucinating-is-hip-again-psychedelics-make-a-comeback/ 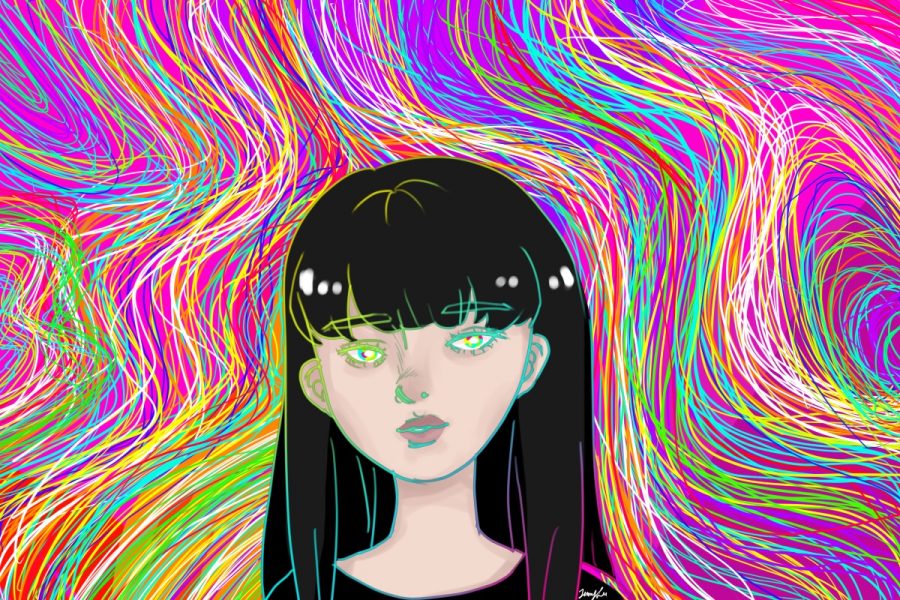 Two students lounge on a hammock, looking up at the sky. The clouds tilt into a kaleidoscope pattern, the white puffs merging into brightly colored circles. One girl laughs and turns her gaze to a tree. They are captivated by every detail, from the vein patterns on individual leaves to the indentations on every branch. The other girl looks at her hair, finding it so beautiful that she begins to cry.

Psychedelics, including mushrooms, LSD and salvia, are a class of drugs which alter users’ senses. These drugs rose to popularity in the 1960s and ‘70s, embodying the counterculture of the era; the “magic pills” became trademarks of hippies who wanted to experience a hallucination-filled journey. Today, these drugs are making a comeback, with many of them as popular now as they were in the 60s, Medical Daily, a health information and news website reports.

The health effects of these drugs are concerning: hallucinogens can permanently harms users’ mental health and lead students who are under the influence to make risky decisions that can be fatal, health teacher Nikki Marafatsos said.

Short-term effects of psychedelics include extreme mood swings, visual hallucinations, dilated pupils, sweating, dry mouth and nausea. Lights, colors and sounds are usually distorted during use, though reactions to hallucinations vary greatly from person to person, according to Psychology Today.

“If you upped the contrast and saturation of everything, that’s what it felt like I was looking at,” a senior girl said of her experience with mushrooms. “I also just laughed a lot at the dumbest things.”

After drinking a fifth of a gallon of tequila at a concert, one senior boy decided to take LSD, commonly known as acid. He put a strip of it on his tongue, but soon forgot he had taken it and reached for another. Later that night, he found himself at his friend’s house tearing up the garden—an action he would later apologize for.

Another senior boy has smoked salvia—the most potent naturally occurring psychedelic—twice and eaten shrooms five times, usually putting them on top of pizza to mask the off-putting taste. He and a group of friends passed salvia around in a circle, watching each other to see how they would react.

After taking the drug, one friend had no idea where he was or who he was with. When the senior boy’s turn came, he described the feeling as what he imagined it would be like to be in a coma.

“Shrooms I liked a lot more because it was a lot more mellow,” he said. “Salvia was just so intense and scary; it was a two minute trip where you didn’t even know your own name.”

For many, the honeymoon phase of psychedelics quickly passes and turns into a “bad trip,” where disturbing hallucinations filled with anxiety, loneliness and traumatic flashbacks overwhelm the user. These bad trips can last up to 12 hours, the Foundation for a Drug Free World reports.

After taking LSD, one senior boy described at first feeling the happiest he had ever been, but he quickly devolved into crying and talking to the moon. The girls who took mushrooms experienced similar mood swings.

“We were just sitting there feeling an extreme, overwhelming sadness,” a senior girl said. “We couldn’t put an explanation on it, to the point where we forgot we took shrooms. We went on a walk and cried for about 45 minutes.”

Repeated use of LSD or shrooms may trigger an onset of schizophrenia, anxiety disorder or severe depression. More commonly, consistent use impacts users’ intellectual abilities, such as impairing memory and concentration, Marafatsos said.

In rare circumstances, consistent use can lead to Hallucinogen-Persisting Perception Disorder, a condition where the cognitive effects of the psychedelics continue even when not using the drug, known as “the trip that never ends.”

“I think one of the misconceptions is that, because there don’t seem to be any noted long-term physical effects, they tend to be safe,” Marafatsos said. “But the reality is that chemicals can hide in the body and reemerge at a different time. This can lead to flashbacks as though a person were on the drug itself, even if they may not have done it in the past day, week or even month.”

Users at Whitman varied in the amount of research and planning they did prior to using hallucinogens, from none at all to comprehensive Internet research and extensive preparation. One senior boy said after just getting information from peers who had tried psychedelics, he was expecting his experience to be more positive.

“They say you have to be in the right mindset to do psychedelics, and I definitely wasn’t,” he said. “I still don’t regret doing it, but I definitely didn’t have the good trips that everyone talks about.”