Don’t ask me about my grades 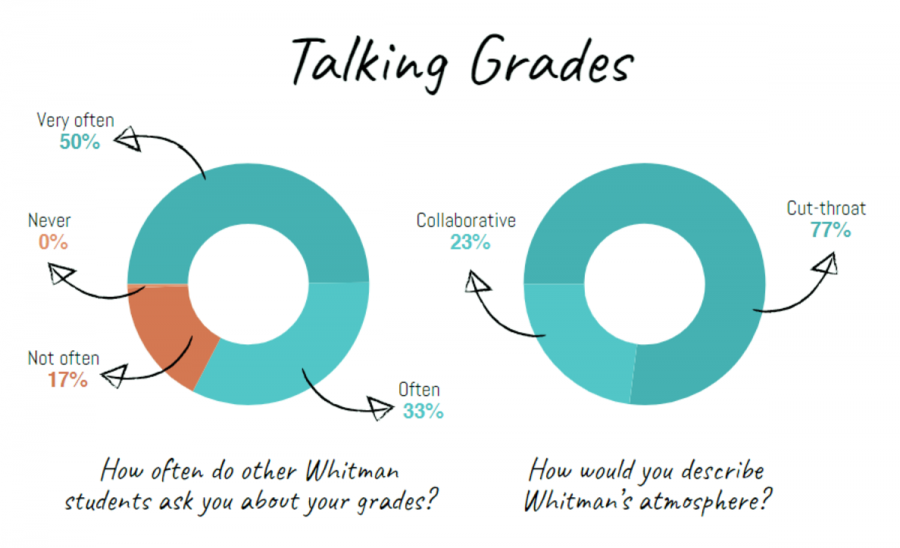 Some things in life are private: social security numbers, credit card information and passwords. But Whitman students seem to selectively understand the concept of privacy, and in terms of grades, they’ve missed the memo.

“What’d you get, what’d you get?” echoes throughout the room any time a teacher passes back a test. I try to deflect questions and fold my tests over, feeling the necessity to hide my grade from wandering eyes and judging heads. To me, my grade is private, but no one else seems to think so.

This is a common problem at Whitman. In an informal lunchtime survey of 30 students, 83 percent of respondents said that other students ask them about their grades either often or very often.

Prying for information about other people’s grades or standardized test scores is not only insensitive and nosy: it’s one of the driving factors behind Whitman’s cutthroat image. Asking someone about his or her grade invariably sends the message that you’re comparing your score to the other student’s score.

The reality is that knowing someone else’s grade doesn’t have any educational benefit; it’s just a self-esteem booster or a topic for gossip.

Even if you have good intentions and think you’re just applauding a friend on a good score, you never know how someone performed on a test before you ask. That means there’s always the risk of making a friend feel worse than they already did about a less-than-stellar score. In reality, this pestering comes across as inconsiderate—not congratulatory. That’s why the same informal survey found that 77 percent of students would describe Whitman’s atmosphere at more cutthroat than collaborative.

Asking about grades also makes for uncomfortable social situations. The culture at Whitman is so ingrained that if you refuse to share your scores, you risk seeming standoffish or implying that you performed poorly—which often isn’t true. Give an answer, and next thing you know, friends of friends will know your score.

As students, we have the power to create change and set the tone of the school. We can stop reducing people to numbers, and instead simply ask peers whether they found test material to be easy or difficult or whether they’re enjoying the course content.

Creating an environment where people support each other with little competition is actually not that unrealistic. Many colleges have instilled a culture of collaboration in students. At Haverford College, for example, the school’s honor code prohibits students from asking each other about their grades. Like many other Whitman students, I hope to attend a college where people aren’t clamoring over each other’s scores and actually want to help each other succeed.

But instead of just trying to escape Whitman’s culture, we should try to fix what we have created. So next time you get a test back, look over your mistakes and keep your score to yourself. As much as you might want to brag or vent about your grade, you’ll end up healthier and happier if you’re proud of your achievements regardless of how others have done.