The Black and White • February 16, 2018 • https://theblackandwhite.net/58667/news/womens-march-attracts-protesters-for-the-second-year-whitman-students-encourage-attendance/ 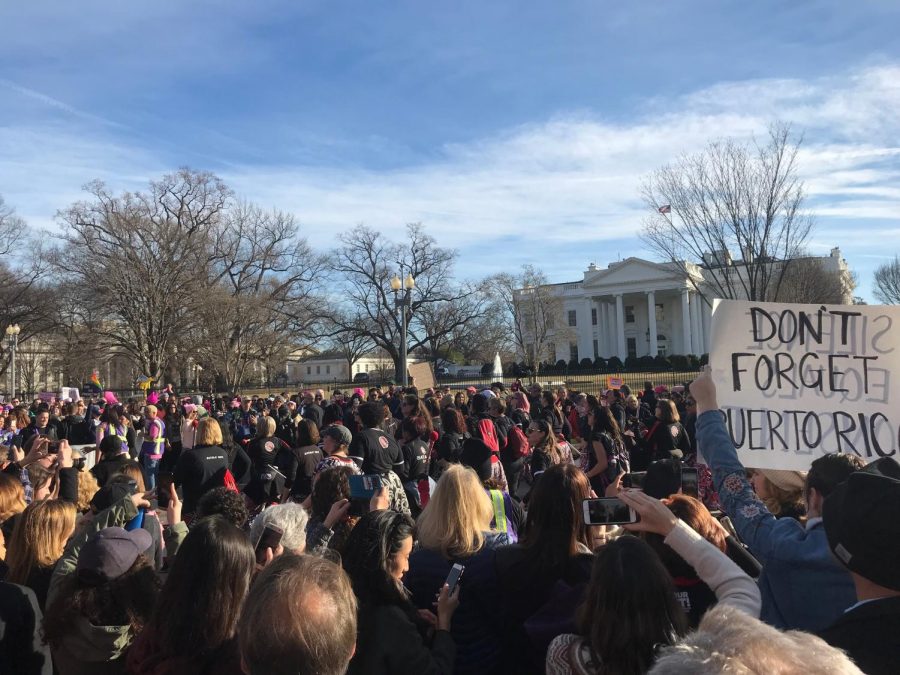 Women's March attendees protest at the White House. This year's march drew about 10,000 participants, including many Whitman students. Photo by Eva Liles.

Chants of “The people united will never be defeated” echoed through D.C. as a sea of pink hats and colorful signs flooded the city streets for the second time. Men, women and children marched from the Lincoln Memorial to the Capitol Building, singing and chanting their calls for change.

On the one year anniversary of the Women’s March on Washington Jan. 21, thousands united to continue protesting inequality in America. According to USA Today, approximately 2.5 million people worldwide participated in the January 2017 women’s marches, organized by the Women’s March Board to protest Trump’s treatment of women. This year, the Washington Post estimated that around 10,000 protesters gathered in the nation’s capital to continue the movement.

While last year’s protests primarily criticized Trump, the 2018 marches expanded to focus on the sexual assault and harassment scandals that occurred throughout the year. Incidents stretched from the media to Hollywood, with well-known TV personalities like Matt Lauer and Kevin Spacey both incriminated after testimony from alleged sexual harassment victims.

“I’m marching because of everything that has come out this past year,” senior Lauren Eisel said. “I feel like this has been a really powerful year for standing up to the abusers—the people who have treated women so poorly for such a long time and gotten away with it.”

Earlier in the school year, senior Rabhya Mehrotra organized sexism seminars to educate students about the everyday sexism many face. Mehrotra worked to encourage students to attend this year’s march and reinforce that the movement is still alive.

“It’s really easy to get angry in the initial stages of a presidency, but it’s also really important to continue doing that work,” Mehrotra said. “Going to a march where you see a bunch of other people with your point of view really increases that momentum.”

Senior Adi Pillai, one of the sexism seminar leaders, believes the march is about more than just Trump’s presidency.

“I’m not trying to focus this too heavily on Trump or anything around him,” Pillai said. “Sexism has been a problem for forever, and unless we do something about it, it will be for the foreseeable future.”

On their website, Women’s March coordinators highlight the importance of staying persistent and determined with the movement. Junior Rachel Zeidenberg agrees that 2017 protestors must remember their purpose.

“I went this year because I thought in some ways it was even more important than last year,” Zeidenberg said. “After [2017] it’s so evident that President Trump is not fighting for all people; he’s fighting for a very small percentage of people. That’s why we need to stand up and fight back.”