Test prep: how much does it help? 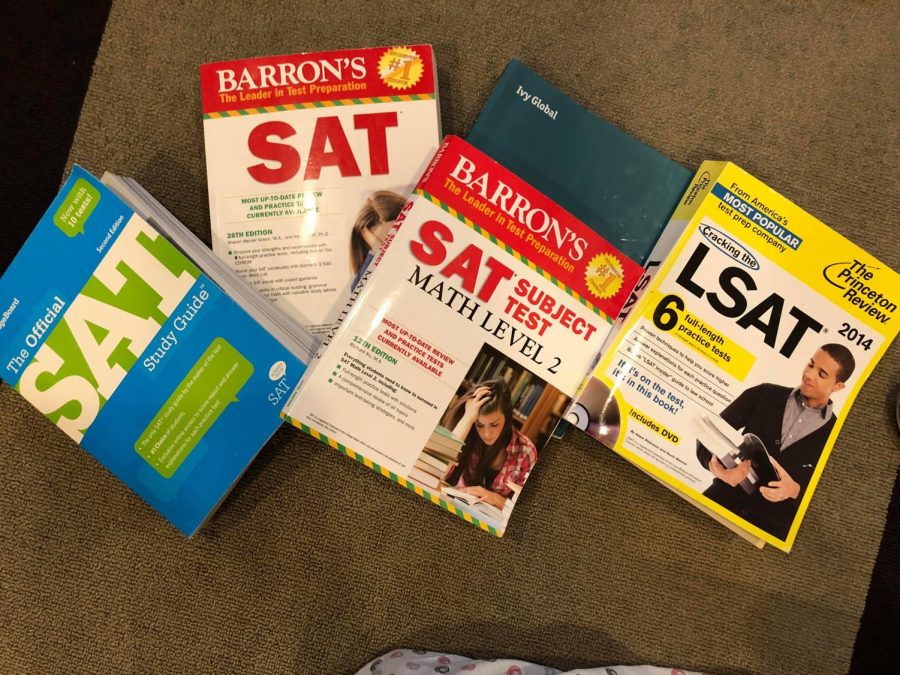 A student accumulates many test prep books to study for standardized tests. With many students taking test prep courses, the Black & White examined the effectiveness of the classes. Photo by Shehrez Chaudhri.

Every Wednesday, junior Danny Ghauri attends a two-hour SAT tutoring session. Though he was satisfied with his original SAT score, he has already purchased a 50-hour tutoring package from test prep company C2.

SAT and ACT test prep classes often cost thousands of dollars, and with countless different classes, companies and tutors available, it can be hard for students and parents to determine which is the most cost-effective. Test prep companies and private tutors claim to raise their students’ scores, but students who’ve taken standardized tests have mixed opinions.

“I took seven classes with  Capital Educators,” junior Hassan Syyid said. “My score used to be  1370 on the practice tests, and now I scored 1580 on the real test so I think it helps.”

Some students expressed frustration with the companies’ large packages.

“I don’t know what to do with the 50 hours I purchased at C2 now,” Ghauri said. “I’ll probably just use them to take advantage of the college essay drafting facilities they offer, rather than the test prep.”

Whitman offers its own test prep class taught by Mr. Derenberger and Mr. Michaels, which serves as a potential alternative for students to expensive private tutoring.

“Tutoring is more individual, and it’s much harder to replicate that one on one teaching in a class,” Derenberger said. “Some people in my class have an ACT score of 21 while others have a score of 34. They’re all are working towards higher goals, but that’s easier to do if you have a tutor so the tutor can only focus on you.”

While many students do see improvements in their score over time, test prep courses don’t guarantee score improvements for everyone. Junior Jay Sun took a month-long SAT course in China over summer break, where he scored well on the practice tests. Sun was expecting a similar score to his practice tests on the real SAT but ended up getting a score that didn’t match his expectations.

“I think it’s just practice that really helps, doing practice tests multiple times, and for that, you don’t really need a tutor to help you,” Sun said. “I’m going to retake the SAT again but this time I’m going to keep doing more practice tests, rather than getting a tutor or enrolling in another SAT class.”

Syyid agreed, saying that tutors weren’t the only way to improve scores.

“The test prep company did help me a lot, but I think the main thing is practice. That actually raises your score a lot,” Syyid said.

This story has been updated to correct the misspelling of a student’s name.