The Black and White • January 29, 2018 • https://theblackandwhite.net/58398/feature/on-soundcloud-nine-whitman-rappers-find-audience-success-online/ 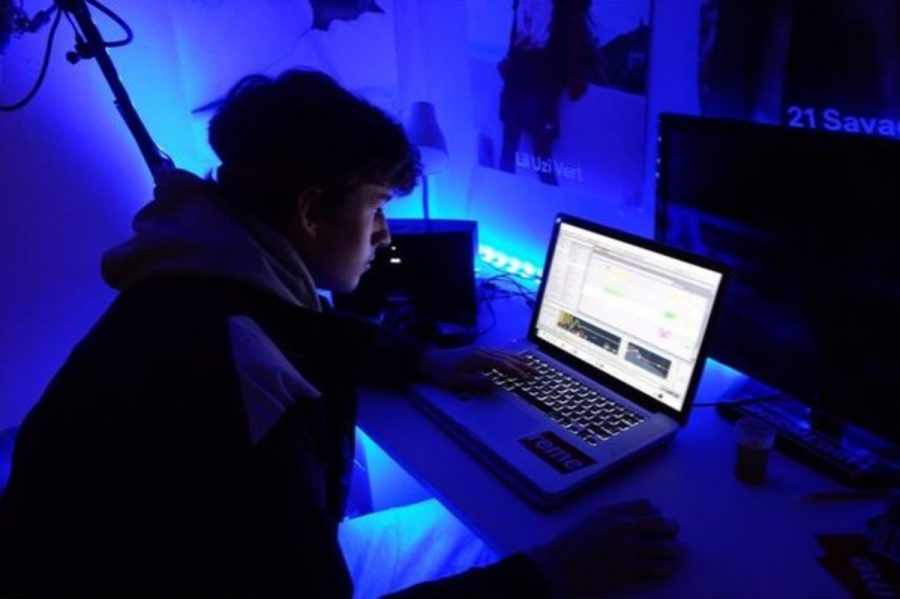 Sophomore Leo Ritter produces beats at his computer. Ritter, known as Nardobeatz, has over 120,000 plays on his SoundCloud account. Photo courtesy Leo Ritter.

For two weeks last June, rapper Chris Bartholomew and producer Leo Ritter, both sophomores, spent every afternoon working on a rap song to post on SoundCloud. Neither thought much of the finished product, a song they called “Beach,” but it’s been played almost 27,000 times since being released on SoundCloud.

Bartholomew, whose rapper name is Creebandz, says he started rapping as a joke after his friend Ritter, known as Nardobeatz, started making beats. After “Beach” skyrocketed to popularity, the pair’s music-making became a more serious endeavor as they continued to put out more tracks that gained popularity. The two now have over 120,000 total plays; most of their songs have a few thousand each.

“It was pretty cool, because then I was like, ‘Okay, I guess people actually like my music I guess I’ll just keep doing doing it,’” Bartholomew said.

The success Bartholomew and Ritter found has helped inspire more Whitman students to release music on SoundCloud. Whether seriously or just for fun, in the past six months, other students have started writing songs, rapping and producing beats.

Most of the music put out by Whitman’s SoundCloud rappers mirrors mainstream rap, with similar beats and lyrics focusing mostly on money, women and status. Bartholomew’s lyrics aren’t meant to be good, or even true, he said. Instead, he aims to write lyrics that are appealing and catchy.

SoundCloud appeals to student musicians because anyone can upload music free of charge, and once it’s up, anyone can listen. For new artists trying to share their music, these features make the app extremely useful.

“Anybody who makes an account can listen to something you’ve put on SoundCloud, so literally anybody in the world can find what you have,” Ritter said. “It’s insane to be able to do that.”

The app’s popularity among students has also increased the appeal of joining in on the rapping trend, sophomore Mateo Gutierrez said. Gutierrez, known as rUUg, has put three of his own songs on SoundCloud and said that all the music students have posted took the pressure off others who might not have wanted to become involved before.

“I feel like a lot of people like rapping but are scared to release stuff because they think they’ll get judged,” Gutierrez said. “Now a lot of people are being like: ‘More people are doing it. Maybe I should try too.’”
When Gutierrez released his newest song Jan. 7, many of his friends posted the link on their Snapchat and Instagram stories. The practice is common when someone releases a new song and helps new music get more plays faster, Gutierrez said.

This support and encouragement is one of the best parts of the experience, Gutierrez said.

“It’s definitely super awesome to see your close friends hype you up and stuff,” he said. “When I was recording that song, I was at my friend’s house and they were there listening and giving me support and hyping me up. I’m always nervous when I do this, because I don’t want to mess up and stuff, and they’re like ‘Oh yeah, you got this, don’t worry.’”

SoundCloud is a favorite of amateur artists not only because of its accessibility, but also because of the potential it holds for career advancement. Many now-professional rappers, like Lil Pump and XXXTentacion, got their start on SoundCloud, and the app is known as the place to discover new artists.

“It’s showing people that literally anybody can make it,” Ritter said. “Like if Lil Pump’s famous… he’s literally just a regular kid, and now he’s one of the most famous people in music. That why everyone’s trying to do it—it’s something you can actually do. It has real-life possibilities.”