The Black and White • January 2, 2018 • https://theblackandwhite.net/58114/sports/sports-teams-help-siblings-perform-bond-with-teammates/ 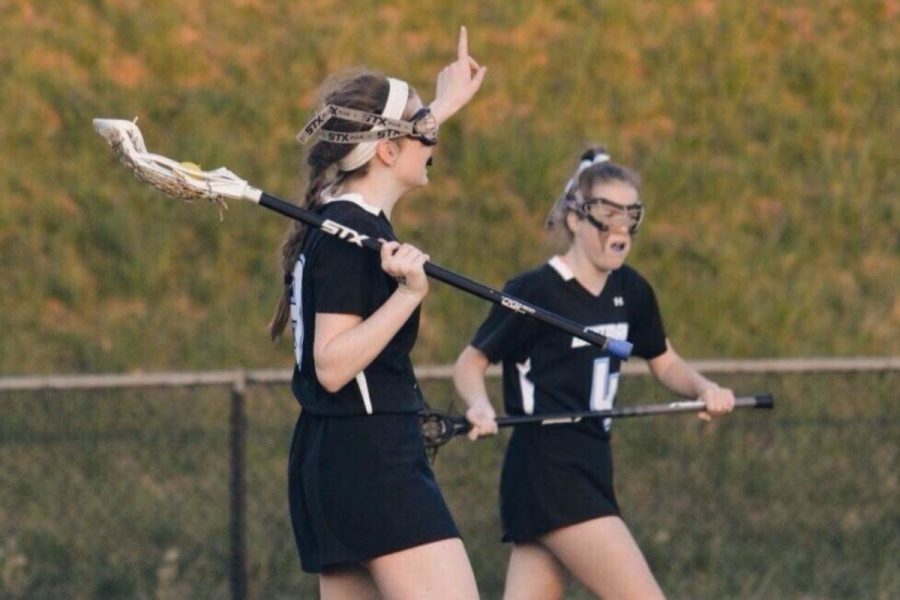 Sophomore Maya Svec and senior Gaby Svec take the field together in lacrosse. The sisters, one of the many pairs of siblings who play on sports teams together, cite team bonding and high standards as benefits of playing with siblings. Photo courtesy Gaby Svec.

Lacrosse forward Clare Cunniff receives a pass from her teammate downfield and rushes to goal. She swings her stick back and launches the ball to the back of the net to put the Vikes up by one. As she runs back, her teammates congratulate her, and she hugs the right midfielder who assisted her. But her teammate isn’t just another player: it’s her younger sister.

The Cunniffs aren’t the only siblings at Whitman who play on a team together. Many siblings who are also teammates say they feel that since they grew up playing together, they know each other’s tendencies and are able to work together more naturally than unrelated teammates.

“We know each other the best,” junior Olivia Personeni, who plays volleyball with her younger sister Ottavia, said. “People have commented how we’re more in sync with each other than the other players.”

Even without having to say anything out loud, junior Rachel Halliday, a coxswain on the crew team, is able to communicate better with her twin sister Amanda and work with her to move the boat faster.

“If she’s in the front of the boat and looking in my eyes, I can tell just by looking at her face whether she’s happy with how it’s going, whether she’s not happy with how it’s going, what’s wrong, or how I can fix that,” Rachel Halliday said. “So sometimes it’s actually easier to do my job because I can tell more about the way the boat is moving.”

In addition to connections during games, having an older sibling can give younger players an advantage in meshing with older ones, sophomore Maya Svec said. Being familiar with her sibling’s teammates before joining the lacrosse team made her more feel comfortable being herself around them, she said.

Although many teammates share strong bonds, the closeness of a sibling relationship brings another level of cohesiveness that goes beyond a normal teammate, Rachel Halliday said.

But while having a sibling on the team has benefits, it can also cause more arguments, since siblings are harder on each other compared to other teammates, senior Gaby Svec said.

“The closer you are, the more comfortable you are around each other. And that means more casual talk, more confidence to stand up to one another,” Gaby Svec said. “I’m harder on her, she talks back to me, and I talk back to her, but that doesn’t happen with other teammates.”

The Hallidays’ arguments sometimes interfere with the overall performance of the boat.

“When I’m doing my job as a coxswain, sometimes to her that sounds like I’m nagging her, which is frustrating to her, but also frustrating to me, because then I can’t do my job as well if I’m thinking about how it’ll affect her,” Rachel Halliday said.

Older siblings are more inclined to correct their sibling if they’re doing something wrong, but also give more praise if they do something good, said senior James Mackall, whose brother John is on the wrestling team with him.

Even with these challenges during games, siblings, just like any other teammates, learn to quickly move past the frustration and focus on the next play. Arguments are almost always resolved during games rather than continuing at home, and siblings enjoy playing together, Personeni said.

“It’s been great being able to play sports with [my brother]. He was just as passionate as I was about football this season, and it helped having him around,” senior Owen Roegge, who plays both football and lacrosse with his sophomore brother Peter, said. “It’s great to see a younger sibling find success so early in his high school career.”