The Black and White • December 17, 2017 • https://theblackandwhite.net/57997/opinion/mpssaa-make-playoffs-fairer-reform-seeding-system/ 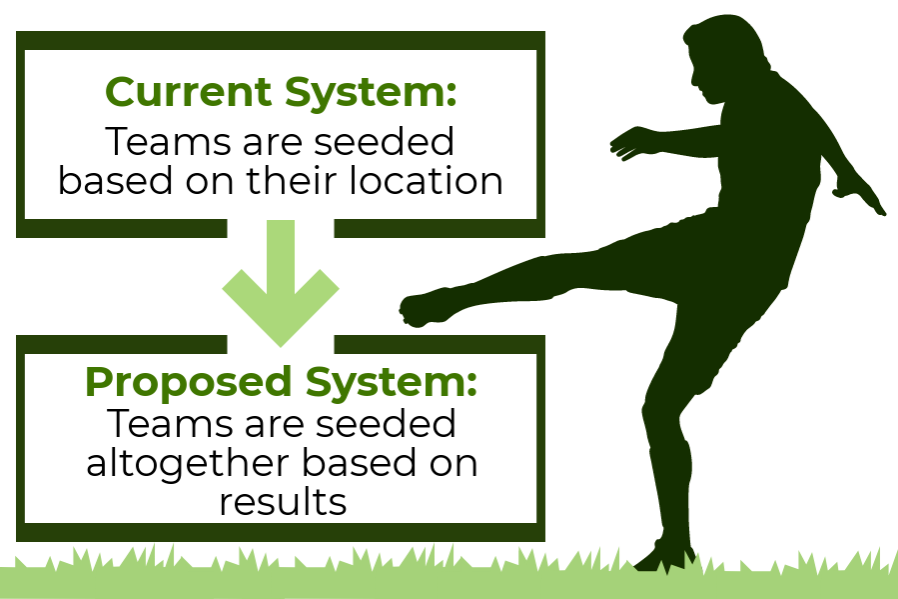 The boys varsity soccer team (11-2-2), ranked fourth in the state entering the playoffs, lost to fellow top-five team Bethesda Chevy-Chase (14-1-3) in the second round, despite their strong record.

In the girls and boys soccer and field hockey playoff brackets, unfair matchups like these are common: teams’ records are compared to those of other local teams instead of  teams throughout the entire state, so the bracket is divided based on location, not regular season results.

The Maryland Public Secondary School Athletic Association should seed all playoff teams based on overall record, eliminating sections and regions, to ensure that teams with the best winning percentages can have a fair opportunity to advance in the playoffs.

The bracket is divided into four regions with two sections each. Within each section, teams are seeded based on their season record, but they aren’t matched up to any teams outside their section. Because of this, neighboring teams with top records can face each other in early rounds.

Teams deserve to be rewarded for their success in the regular season. By eliminating regional sections, the MPSSAA can compare teams to the entire state instead of just the other teams in close proximity to them.Without regions and sections, players’ hard work throughout the season is rewarded with easier matchups. Whitman boys and girls soccer players agree: when surveyed, 9 of 14 stated they’d prefer a bracket without regions and sections.

In the current bracket system, most sections have eight teams, but half the sections have fewer teams, allowing weaker teams to not have to play in the first round of playoffs. For example, Charles H. Flowers High School’s boys soccer team in Prince George’s County didn’t win a regular-season game this season, yet they got a bye in the first round of the playoffs because of the lack of teams in their section.

Playoffs shouldn’t promote teams that have fewer competitive successes. A system without sections that seeds the entire state in one bracket would force weaker teams to play the top teams in the early rounds, ensuring that weaker teams don’t receive unfair advantages.

Admittedly, a system without sections would increase travel time and expenses since teams would need to travel to play any other team in the state rather than teams in close proximity However, 11 of the 14 surveyed Whitman boys and girls soccer players, who regularly travel for club teams, said they’d be willing to travel longer distances for fairer matchups. Schools can also submit reimbursement forms to the MPSSAA to assist with travel costs, making it easier for schools to travel far and avoid logistical problems.

Teams who were successful during the regular season shouldn’t be forced to play other top teams so early in the playoffs. The current system jeopardizes top teams’ playoff success.