The Black and White • December 3, 2017 • https://theblackandwhite.net/57895/feature/spirit-of-autumn-display-at-artechouse-showcases-fall-weather/ 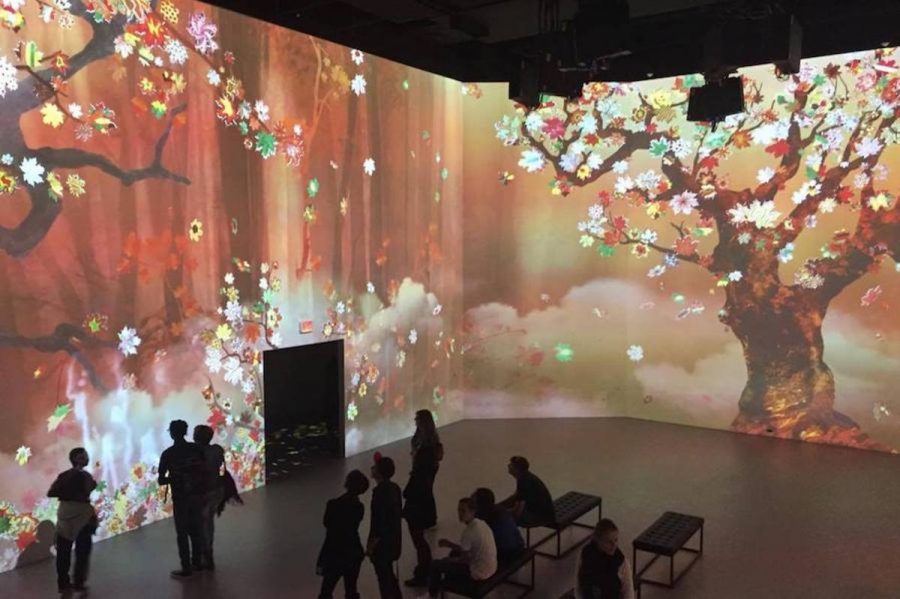 Visitors look on at the display at ARTECHOUSE. The exhibit lasted Oct. 1-Nov. 5. Photo by Shehrez Chaudhri.

An animated tree covers the walls of the room, surrounded by bright autumn leaves. After swirling to the ground, the leaves form a trail, leading visitors to a new space. In the next room, they are able to  color their own leaves, which are then digitally scanned and incorporated in the animation.

Currently one of D.C.’s most popular museums, ARTECHOUSE is one of the few museums in the country that showcases exclusively digital-based art. The museum opened in June and displays interactive pieces by contemporary artists that change regularly according to the seasons.

ARTECHOUSE’s most recent exhibition, Spirit of Autumn, ran from Oct. 1 to Nov. 5 and attracted many visitors around Maryland and DC.

“I heard about it from a friend and saw a few Facebook videos about its uniqueness in its mix of technology and art,” senior Clara Lyra said. “I really liked it, and I think it’s  a great start in this field of art.”

The museum contains a display of digital rain showers that pour down when someone claps their hands. One of the most popular displays uses motion detectors to sense when a guest approaches, and the leaves in  the background mirror their movements. This responsive technology sets ARTECHOUSE apart from other museums, senior Cameron Newcombe said.

“It was nothing like I’d ever seen before- it was like a museum, except the art was alive and interactive,” she said.

ARTECHOUSE has a daytime display that lasts until 4 p.m. and an evening display that starts at 5 p.m. The time restrictions of these exhibits present complications for some visitors, as does the cost.

“I thought it was cool but it was kind of small,” senior Sharon Lee said. “You have to pay around $15 to get in and there’s a time limit of 40 minutes, so I probably wouldn’t go again.”

Visitors can only view the exhibits in small groups, which rotate through about every 15 minutes. This, combined with the museum’s popularity, often results in extended waiting periods for guests.

“It was really backed up and behind schedule when we went, but that was just probably because they had just opened and were figuring things out,” junior Geoffery Kulp said.

Still, some students see it as a continuing source of entertainment.

“It was so cool, I absolutely loved it,” Newcombe said. “And because they always have new displays during a new season, I will definitely go again.”