The Black and White • November 15, 2017 • https://theblackandwhite.net/57752/sports/non-seniors-take-the-lead-sophomore-and-junior-captains/ 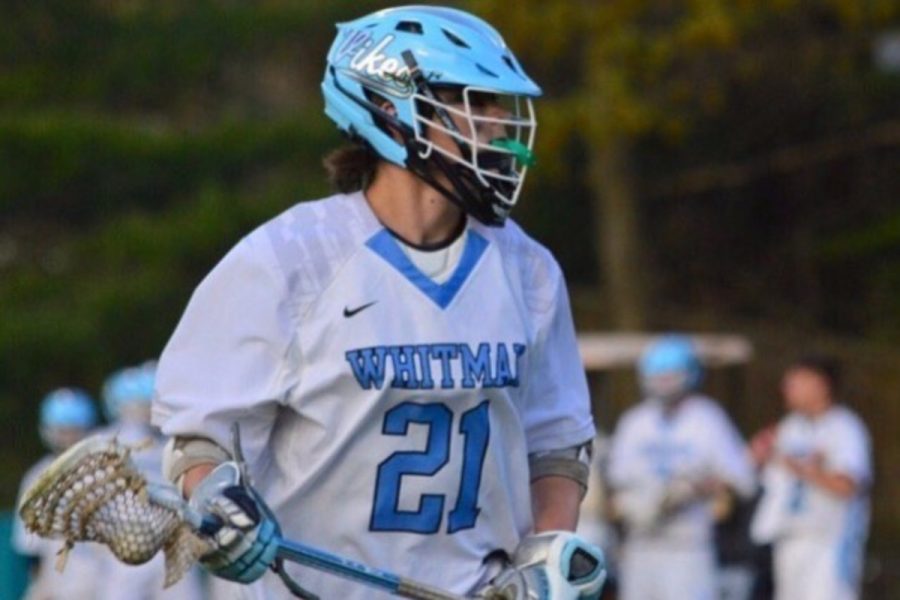 Senior Owen Roegge looks to pass down field. Roegge will be a captain this season for the third year. Photo courtesy Owen Roegge.

Three boys lacrosse captains run out to midfield for the coin toss before the game starts. Following standard procedure, the captains shake hands with their opponents—but what the opposing captains may not realize is that one of Whitman’s captains is a sophomore.

While many think of team captains as the oldest, most senior members of teams, some teams designate juniors or sophomores as captains instead of seniors.

Still, each sport is different, and this decision often depends on what the coach and team looks for. Every senior on girls crew, for example, is automatically a captain, but three of the four captains on girls volleyball this year are juniors.

Before their season started, each girls volleyball player who wanted to be a captain, regardless of age, filled out a questionnaire regarding her leadership skills and the reasons why she would make a good captain. Coach Kassondra Greis then selected captains based on these responses and her observations during preseason.

“I chose captains based on personality,” Greis said. “I wanted the best leadership possible, and age was not a priority for us.”

Junior captains say they have the leadership skills to guide the team, despite being younger than some of their teammates.

“I feel like I might have the experience of a captain, having played for a long time and knowing the game really well,” junior volleyball captain Olivia Personeni said. “I feel like when the situation gets tough, I’m pretty level-headed, and when I’m playing well I can be very supportive and cheer the people on the team up.”

To the underclassmen on the team, it doesn’t matter whether or not their captains are the oldest members, as long as they can lead the team.

“They’re all really good leaders naturally, but I think it has more to do with them personally than them being in a certain grade,” sophomore Bella Pardoj said. “Their age doesn’t really matter.”

On girls soccer, teammates voted junior Morgan Wiese as captain along with three seniors. Some of the younger players can relate to her more since she’s closer in age to them, freshman Halle Cho said.

Despite their experience and qualifications, leading the team as a junior comes with challenges, the largest being acting as a captain to the older players.

“I have to figure out how to make myself feel like a seniority figure even though I’m the same age or younger than some of the team,” junior volleyball captain Lauren Oppenheim said.

But for the most part, even the seniors who aren’t captains respect their junior leaders and hold them in high regard.

“The three junior captains are great, and I feel like they compliment each other really well in different aspects of what the team needs,” senior Natalie Chen said. “Our team this year is also pretty young where the majority of people are juniors. Having a new coach who wants to build up the program, it makes sense to have younger captains for the future team and to build relationships with the newer coach.”

While there are difficulties with junior captains, serving as a younger captain benefits the team in coming years. Senior Chelsea Cahill is a captain for the girls soccer team for the second season, and her additional year of experience helped her become a more confident and responsible captain, Wiese said.

“There’s definitely a period where you have to get used to it,” Wiese said. “Next year, I can go into the season already knowing what to do and how things are run, so I can help the new captains. And if there’s something that I saw didn’t work well, it’s easy to fix for next year.”

Seniors John Luke Iglesias and Clark Boinis served as wrestling captains both last year and this year, and they feel that they can do an even better job leading since they know what worked well and what didn’t, Iglesias said.

“[Being a captain last year] has given me experience on how to carry myself and act as an example for everybody else on the team,” Iglesias said. “I now know what my teammates look for in a leader to guide them through the grueling season.”