The Black and White • November 7, 2017 • https://theblackandwhite.net/57648/feature/jewish-youth-groups-connect-students-transform-lives/ 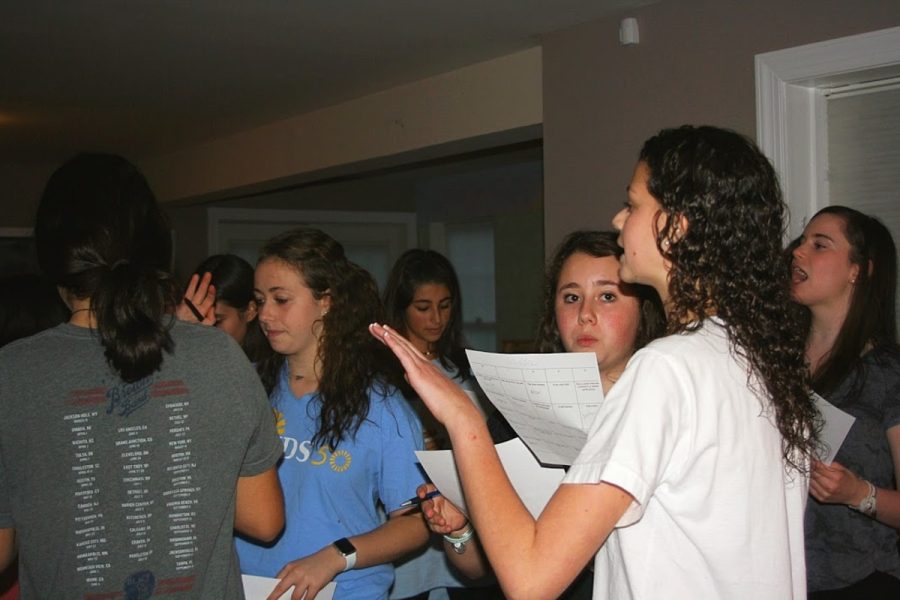 It’s no secret Whitman has a large Jewish population—there are more than 10 local synagogues. Many of the students who attend these synagogues also participate in local youth groups where they create relationships and memories with other Jewish kids from the area and discover their Jewish identities.

On a Saturday night after a long week of school, the Ko’ach BBYO chapter convenes for a night of relaxing and activities. They reveal secrets, reminisce about previous gatherings and escape from the stresses of school and adolescent life.

BBYO, short for B’nai B’rith Youth Organization, is popular among students. It connects Jewish teens around the world through conventions and activities.

Each member is assigned to a chapter based on their location and gender. Boys are placed in Aleph Zadik Aleph, while girls participate in B’nai B’rith Girls.

“We are fully inclusive of Jewish teens no matter their sexual orientation, their interests and how they observe Judaism,” Stevens said.

Each chapter meets on Monday nights to discuss community service and upcoming events. On some Wednesdays, the chapters hold fundraisers for local charities, and on Saturdays, they convene for lighter activities, like sleepovers.

Junior Sarah Clement likes that BBYO isn’t too time-consuming and is still a meaningful activity.

“I really like how it’s not a big commitment, but it is still a fun way to meet more people and have a new group of friends,” Clement said.

“I’ve met a lot of middle schoolers and people older than me that I wouldn’t have been friends with,” Cohen-Dumani said. “I like how you can meet people outside of schools and feel really close to others.”

BBYO provides students with a thorough understanding of Jewish life, which can potentially benefit their futures, Clement said.

“I’ve been able to learn a whole new take about being Jewish and living in the world today,” Clement said. “It’s really prepared me for what I may face in the future.”

Her father Dan Clement—once a member of the Montgomery County AZA chapter—now advises the group and hopes to pass on his experiences to his children.

“I think my kids will develop leadership skills and a Jewish experience as they realize what Judaism means to them,” Dan Clement said. “BBYO is about providing a meaningful Jewish experience.”

Hundreds of Reform Jews gather for a weekend retreat. After not seeing each other for months, friends reconnect, sharing stories and memories of previous retreats. On Friday night, they gather and recite Jewish prayers and songs. The next day they participate in a day of team-building activities and discussions. This is a classic NFTY gathering.

NFTY, the North American Federation of Temple Youth, is the main teen youth group for Reform Jews. It consists of 19 regions across North America with each region accommodating over 200 members.

The group is centered around the Jewish idea of “Tikkun Olam,” meaning repairing the world. It works to spread awareness on mental health, social justice and LGBT rights. The goal is that this education will be beneficial for society, NFTY Regional Director of Youth Ellie Tepper said.

“Teens are the future so by educating them, we can make the world a better place,” Tepper said. “They often feel like they have no voice but I think they have the most important voice.”

Senior Madison Holt, an executive board member for the Mid-Atlantic region, enjoys the welcoming aspect of NFTY.

“The way we program is so that you’re allowed to build your own perspectives,” Holt said. “We don’t want to force people to believe a certain way.”

The group has impacted junior Danielle Hazan’s life in ways she couldn’t have imagined.

“I have friends all over that have changed my life,” Hazan said. “They’re some of the best people I know.”