The Black and White • June 13, 2017 • https://theblackandwhite.net/56618/feature/sophomore-operates-to-save-lives-one-heart-at-a-time/

Sophomore operates to save lives, one heart at a time 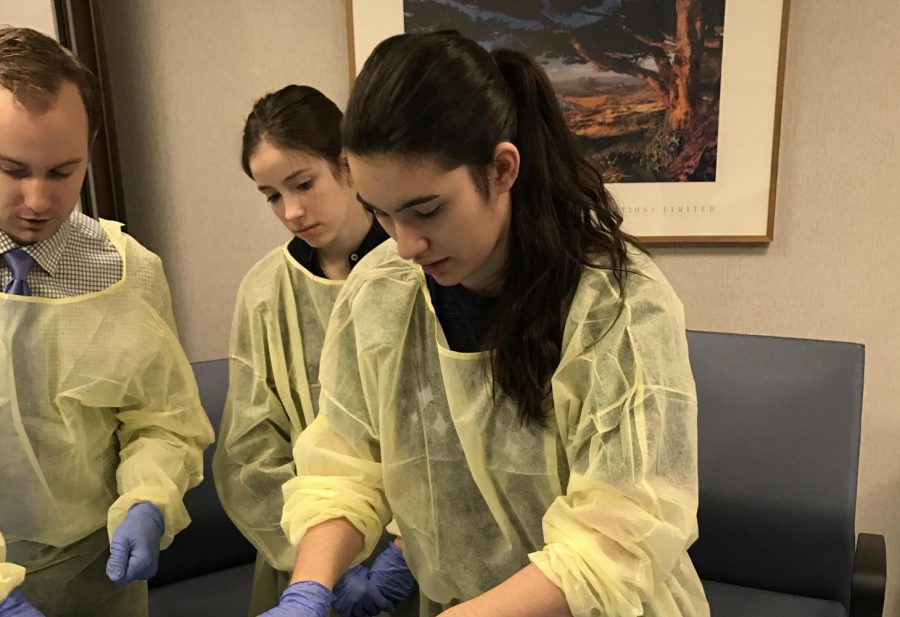 Sophomore Kalia Dell operates on a heart for her internship. Dell decided she wanted to be a doctor after experiencing medical setbacks herself. Photo courtesy Kalia Dell.

Nerves set in and questions flooded her mind as she slipped into her medical scrubs for the first time. But as sophomore Kalia Dell reached the operating table and watched a surgeon delicately slice open a patient’s heart, her anxiety transformed into confidence.

Dell interns at the Washington D.C. Veterans Medical Center in Arlington, working alongside a cardiovascular surgeon and other student interns from colleges around the country.

Dell began interning at the hospital after her father contacted the senior cardiovascular doctor to discuss Dell’s interest in medicine. The doctor offered Dell a chance to experience the day-to-day reality of a career in surgery.

“She told me when she applied for the position,” sophomore Nora O’Prey, a friend of Dell’s said. “When she got in, she was really excited.”

Dell’s interest in medicine stems from her own experience as a patient. When she was thirteen, she was involved in a skiing accident that put her in a coma for twelve days, requiring numerous surgeries and intensive medical treatment. The experience made it clear to Dell that she wanted to work as a doctor to save lives, Dell said.

“I felt first-hand what a difference they could make in someone’s life,” Dell said.

As part of her training, Dell shadows surgeons, performs dissections and observes various procedures in operating rooms. Doctors from various fields help her train, each presenting different methods and skills for operations depending on their area of specialty.

“Each doctor has specific knowledge and different techniques,” Dell said. “It’s so interesting to see fresh perspectives on treatments and conditions. It’s been such a valuable and enlightening experience.”

The first operation Dell witnessed was a surgery involving a coronary artery bypass graft, and it established her passion for surgery. In the operation, Dell watched the surgeons reroute blood around clogged arteries by replacing those useless vessels with functional veins removed from the patient’s legs.

“Coronary surgery is interesting because your heart is the only muscle in the body that never gets to rest,” Dell said. “If you don’t get blood supply there, you die. It’s interesting to do surgery there because we actually stop the heart to work on it then start it back up again.”

Through interning at a military hospital, Dell has worked with a number of veterans and gained insight about her patients on a more personal level.

“I have gotten to know some amazing people that have given their lives and limbs to serve our country,” Dell said.

This summer, Dell will take a research position working with doctors and other medical students at a cardiovascular physiology lab.

“I’m extremely proud of Kalia, not only for what she has done, but more importantly, for who she is,” Kalia’s father, Larry Dell, said. “Kalia has overcome significant challenges in her young life but has had the strength, determination and courage to forge ahead.”