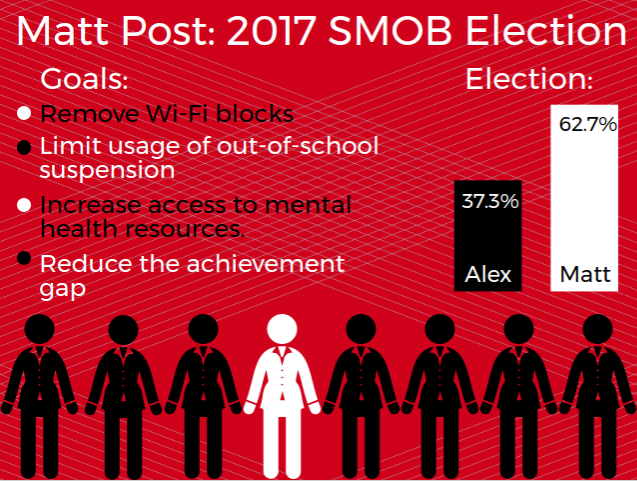 As students finished voting for the Student Member of the Board, they waited in suspense before the county made results public. After a few hours, Sherwood High School junior Matt Post announced on Instagram that he had won the race to be the 40th SMOB April 27.

In the SMOB election process, a primary ballot reduces the number of candidates by one half, followed by a preferential ballot that selects the final two candidates running for the position. MCPS middle and high school students countywide, excluding seniors, then cast a vote for one of the two final candidates.

“The election process was definitely grueling because I had to balance my campaigning with my school work,” Post said. “It was, however, really rewarding, as I got the opportunity to go to schools and hear the opinions of diverse and talented students.”

In his campaign platform, Post advocated to remove Wi-Fi blocks, limit usage of out-of-school suspension and increase access to mental health resources. He also said he hopes to reduce the achievement gap by advocating for stronger funding for elementary level programs to make sure every student gets equal opportunities.

“I want to continue to level the playing field by pushing for more economic support of disadvantaged students so that there are no monetary barriers for a student to get a good education,” Post said.

MCPS students watched a mandatory televised “Meet the Candidates” program April 26, which introduced them to the SMOB candidates and gave each candidate an opportunity to answer questions about their agendas. Post’s answers focused on closing the achievement gap and better preparing teachers to tackle mental health, which made him a more attractive candidate to many students, junior Tyler Zhu said.

“I voted for Matt because he said during the TV show that he would put more emphasis on mental health if he becomes SMOB,” Zhu said. “His goals were very clear to understand and appealed to me more than his opponent’s.”

As SMOB, Post hopes to prioritize the issues that he advocated for during his campaign. He also hopes to improve student life after graduation by providing more career training programs, he said. These training programs provide opportunities for students who would prefer to pursue a specific career like culinary arts or mechanics, directly after high school instead of attending college.

“Matt has already made such a positive impact on MCPS that if he were to leave, he would still have a great track record of which he could be proud,” Guerci said.

Now that the SMOB voting rights have been expanded, Post can vote on everything except matters that present a conflict of interest, such as firing teachers. This means that he will have a far greater impact on policy changes that the BOE implements, Post said.

“The SMOB is highly influential, as they are one-eighth of the Board of Education and have the power to vote,” Post said. “Grand reform, of course, cannot happen in the term of one SMOB, and thus I hope to put forth the groundwork for reforms that the SMOBs in upcoming years can build on and potentially execute grand reform.”