The Black and White • June 7, 2017 • https://theblackandwhite.net/56558/news/supreme-court-same-sex-marriage-lawyer-visits-whitman/ 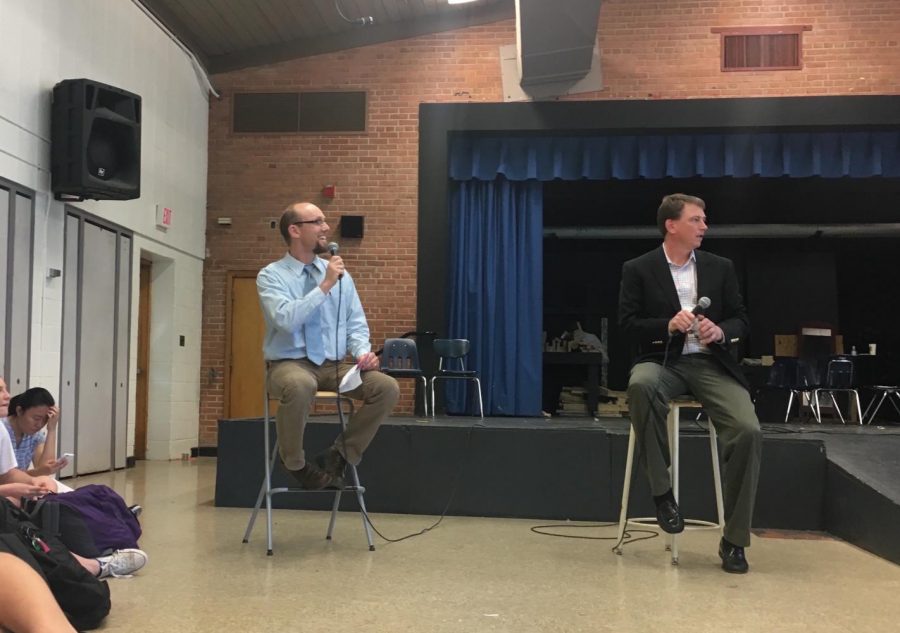 Whitman parent Douglas Hallward-Driemeier, a lawyer who argued in favor of same-sex marriage before the Supreme Court, visited Whitman to speak about his experiences May 19.

During both lunches, about 150 students gathered in the Whittier Woods auditorium to hear about Hallward-Driemeier’s work in the courtroom. Specifically, he discussed arguing the Obergefell v. Hodges Supreme Court case, which eventually legalized same-sex marriage in June 2015. AP Government teacher Colin O’Brien organized and led the talk.

“It was excellent to have him come in and speak because he argued a landmark case before the Supreme Court,” O’Brien said. “This was a big case dealing with a civil rights issue that students can relate to.”

Hallward-Driemeier has two sons currently attending Whitman and was able work on the case in D.C. Students said his visit highlighted the benefits of living in an area populated with many civil service workers.

“I think that it shows how close we are to these huge issues,” freshman Jordan Shaibani said. “We get to see the political side of things, which is really cool.”

Hallward-Driemeier has appeared before the Supreme Court 16 times and was able to give students an inside look into what it’s like to face the justices. Hallward-Dreimeier’s main points included how he and his law firm dealt with the time constraints they faced while formulating their Supreme Court appeal, the difficulties in balancing work with family and what made him determined to win the case.

“Something that motivated me more than anything else was what Thurgood Marshall had accomplished through the NAACP with Brown v. Board of Education,” Hallward-Driemeier said. “The idea that law could be a vehicle for positive social change and making our society more just was what attracted me to become a lawyer.”

“He really changed the standard rules of marriage. That’s incredible,” sophomore Bella Owen said. “I was really excited to hear him knowing that the case is a huge part of the politics that have affected our lives.”