The Black and White • May 24, 2017 • https://theblackandwhite.net/56266/sports/gymnastics-team-places-third-at-counties/ 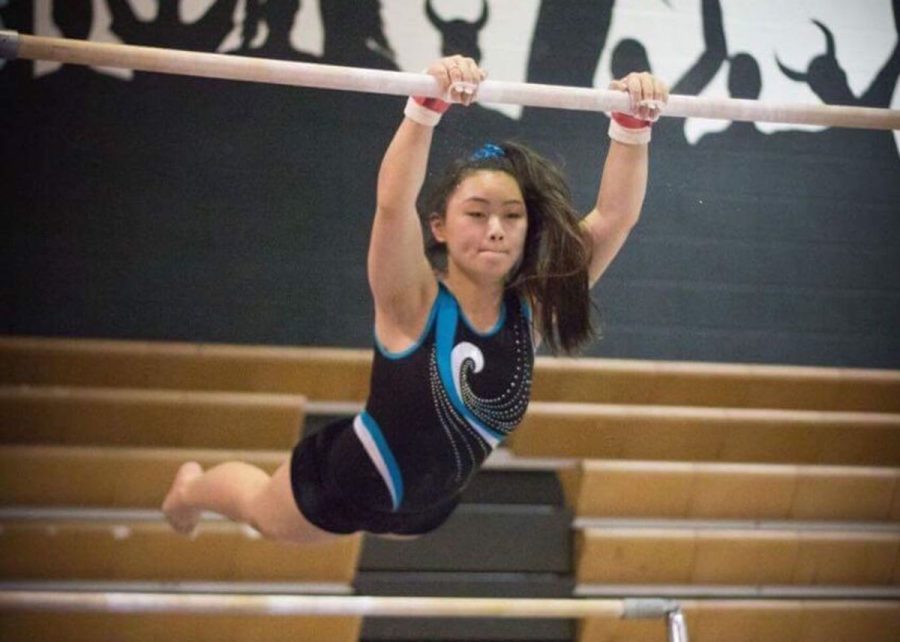 Senior captain Annie Burton practices her technique and choreography on her bar routine. The Vikes took third place at the county championship on May 9. Photo courtesy Annie Burton.

The gymnastics team took third place at the county championship May 9 with a score of 146.6 points, narrowly edging out the B-CC Barons by just over one point to make the podium.

“Going into counties, we knew that first and second would go to Walter Johnson and Sherwood,” McAleese said. “They’re the best in the county, so the fight for all the schools was for third, and we got third so it was a really good overall score.”

There are four events in every competition: vault, floor, beam and bars. Up to six gymnasts from each team perform in each event, and the judges take the five best individual scores—which are out of ten— from each gymnast and add them together to form the overall team score.

The team entered the competition with better choreography and harder skills than previous years, which contributed to a higher difficulty score. But throughout the season, the same six gymnasts competed in every event at most meets, which prevented members of the team from specializing in a single event, senior captain Caroline LaPlante said.

The county championship is the most important competition of the season for the team. In the two weeks preceding counties, the gymnasts focus most on refining their skills and ensuring that their routines are choreographed. They generally perform the same routine year after year, although a skill may be added or taken away, LaPlante said.

Senior captain Annie Burton was the top scorer for the Vikes, receiving 30.45 points and an 8.75 on her floor routine. Burton said a reflective approach helped her achieve this particularly high floor score.

“To prepare myself, I think about the corrections I’ve had trouble making so that I remember them in the routine,” Burton said.

In addition to contributions from the squad’s seniors, many underclassmen brought new skills and energy to the team this year. The team bonded during car rides to meets and hung out more outside of practice this year compared to previous years, Burton said.

“The season was really fun,” Burton said. “We got a lot of new freshmen that had gymnastics experience, which made the team stronger in our meets. I made a lot of close friends, so I’m really going to miss them.”