The Black and White • May 11, 2017 • https://theblackandwhite.net/56106/sports/girls-lacrosse-shuts-out-einstein-in-overwhelming-victory/ 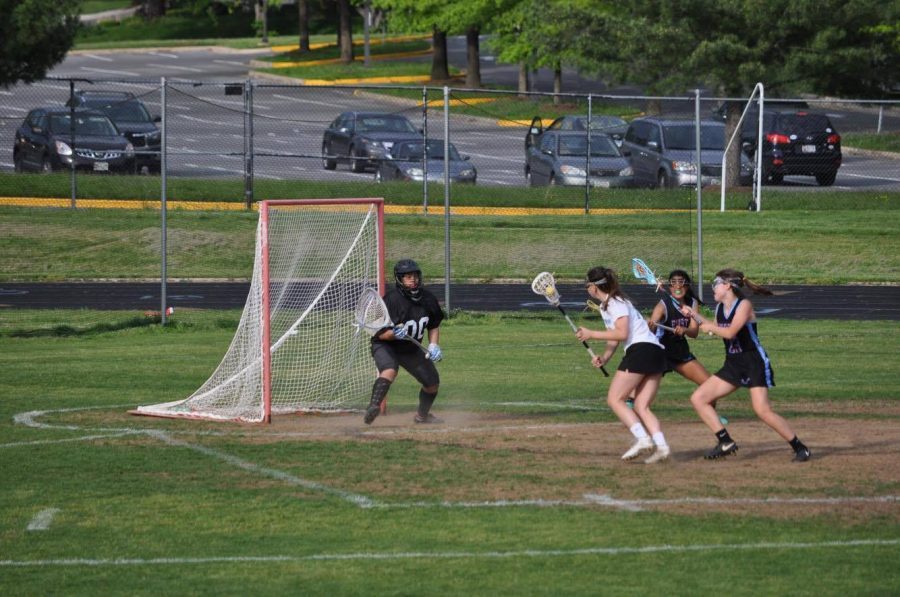 Attacker Eden Gray finds the back of the net to extend the Vikings' lead. The team defeated Einstein in a crushing victory to advance to an 11-2 record. Photo courtesy Julia Curran.

After a bye in the first round of the playoffs, the girls lacrosse team (11–2) dominated Einstein in the second round Wednesday night, holding the Titans scoreless in a 19–0 rout at home for their senior night.

Led by attacker Eden Gray and midfielder Emily Schweitzer, the Vikes shut out an opponent for the first time this season, and the result marked a season high in goals scored in a single game.

The squad controlled both the offensive and defensive ends of the field, limiting the Titans to just one shot on goal. Gray sparked Whitman’s offensive run with a goal less than a minute into the game.

“We just kept on pushing and sticking to how we play our game and kept playing fast, moving quickly on attack and worked to get the ball back if we lost it,” Gray said.

The Vikes hope that this big win will set the tone for future games and spark a deep playoff run.

“This gives us really good momentum going into the playoffs, especially when we’re against some of the harder teams, like Churchill,” midfielder Kendall Hall said.

The team plays the Walter Johnson Wildcats at Richard Montgomery on Friday night at 5:00 p.m.