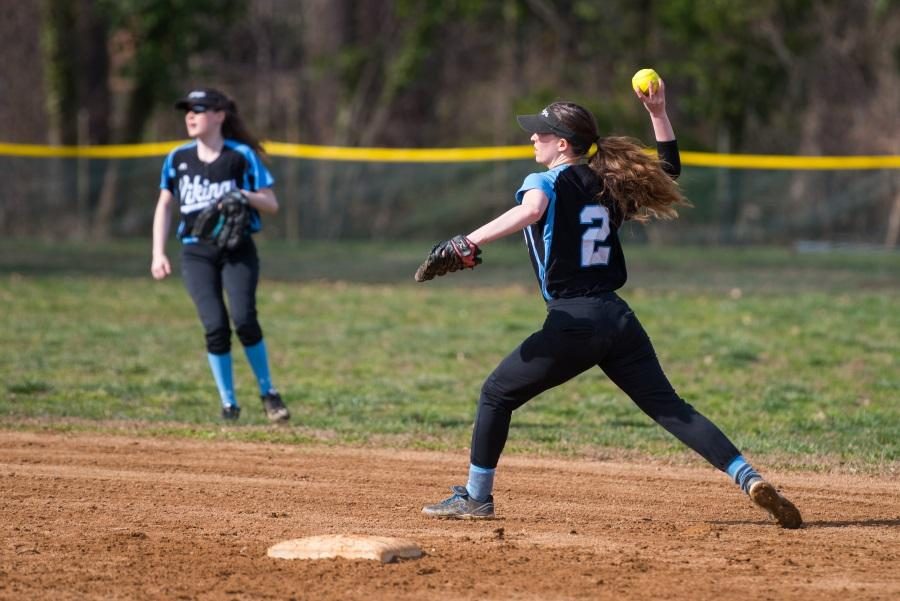 Infielder Laura May throws the ball across the diamond in the team's 17–4 loss against Seneca Valley. Photo by Jefferson Luo.

The boys lacrosse team (1–0) defeated the Springbrook Blue Devils 15–4 in their opening game of the season Tuesday night.

The Vikes struggled with their shooting early on but improved as the game progressed, scoring 9 of their 15 goals in the second half.

The points were spread among multiple members of the team with five players scoring at least one goal.

The Vikings will look to build off of their conclusive victory when they travel to face the Sherwood Warriors next Wednesday at 7:15.

Lindsey Schneider and Eden Gray both added multiple goals each for the Vikes, while a goalie combination of Clare Hisle and Lily Jacobson held the Devil’s offense in check.

The Vikes next play at home Friday at 7 versus Holy Child.

The boys tennis team (1–0) scraped by the B-CC Barons Tuesday 4–3, behind a comeback win from singles player Leo Esztergomi.

With the game tied at three, Esztergomi lost the first set but came back to win next two, giving the Vikes the win. Besides Esztergomi, doubles teams Kevan Nathani and Mauricio Gottret and Ben Marks and Alex Chen won.

The team’s next game is Friday at home against the Clarksburg Coyotes at 3:30.

The baseball team (1–0) stole the season opener 6–4 against the Seneca Valley Eagles on Tuesday.

After two scoreless innings, the Vikes had a monster third inning with four runs, highlighted by a two RBI triple by outfielder Justin Carboni.

Despite a strong game-tying effort by the Eagles in the fifth inning, the Vikings were able to pull away with a two out RBI triple by outfielder Eric Wayman.

The Vikes play at Poolesville against the Falcons on Thursday at 3:45.

The softball team (0–2) was edged out by the Seneca Valley Eagles 22–7 on Saturday.

The team’s next game is Thursday at Poolesville at 3:45.

The coed volleyball team (0–1) fell to the Poolesville Falcons in a 3-0 defeat Tuesday.

“We lost the game, but we fought really hard at the end,” senior Maddie London said. “Overall we played really well for our first game considering some starters had never played volleyball before.”

Though the loss was upsetting to the team, they learned that to win more games in the future, they need to have more of an emphasis on mastering the fundamentals and basic concepts in volleyball, London said.

“We plan on focusing on defense, coverage, and blocking during games,” London said. “We are going to keep an open and optimistic mindset throughout the season.”

The team hosts Springbrook on Thursday at 3:45.

The boys volleyball team (1–0) fell to the Poolesville Falcons in a 3–0 defeat Tuesday.

With key player junior Aaron Zhao missing for the first game of the season, the team had to refigure to make up for the loss.

“The game didn’t go too well for us; it was a bit sloppy,” sophomore Greg Shaffer said. “I thought we did pretty well for our first game together, but it wasn’t exactly what we were expecting although we knew Poolesville was a good team and would be a challenge.”

This game served as a turning point for the squad as many of the players had never played in a real game before. Moving forward the team is going to put more of an emphasis on communication while on the court, Shaffer said.

“I learned a lot of new rules of the game I hadn’t known before, and different strategies we could use in some circumstances,” Shaffer said.

The team plays Thursday at home against Springbrook at 5:30.