The Black and White • March 16, 2017 • https://theblackandwhite.net/55461/opinion/its-time-for-a-running-clock-in-girls-basketball/

It’s time for a running clock in Girls Basketball 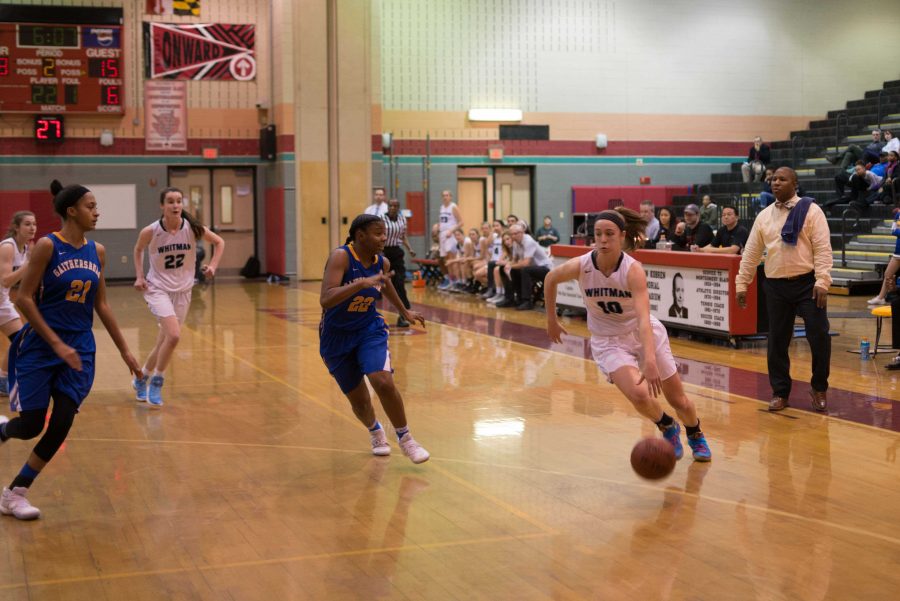 Guard Abby Meyers drives to the basket in the team's dominant 69-46 win over Gaithersburg. The Vikes outscored opponents in wins by a combined 662 points this year. Photo by Tomas Castro.

This year, both the JV and varsity girls basketball team have dominated opposing teams with these scores. Combined, they’ve won 21 games by more than 30 points, 27 by more than 20 and the JV team has not had one game decided by less than 10 points.

To combat repeated blowouts, the Maryland Public Secondary School Athletic Association (MPSSAA) should institute a running clock in girls basketball since the sport lacks a mercy rule. In basketball, a running clock means if one team is up more than 30 points in the second half, the clock only stops during coach’s timeouts, injuries or if a team cuts the deficit to less than 30.

A running clock would eliminate the time at the end of games during which dominant teams run up the score.

The girls basketball team this year has outscored opponents by over 500 points. The lack of competition was most apparent when the varsity team rested most of their starters, including guard Abby Meyers, against the Einstein Titans, played multiple JV players and still won by 46.

Getting blown out is not only demoralizing, but it also serves little purpose to the winning team, only giving them more practice against inferior competition.  By the fourth quarter, JV coaches often tell their players not to guard their opponents outside the three-point line just to keep the game close. Adding a running clock would end these blowouts quicker, making final scores less lopsided and leaving less time for the dominant team to show off.

Furthermore, basketball is one of the few MPSSAA sports without any type of mercy rule; football, field hockey, baseball, boys and girls lacrosse and softball all have a running clock or a similar rule. Football’s running clock has been successful at reducing the amount of time spent playing a lopsided game and also limits the potential for more injuries.

While it’s important to finish out games and allow teams the time to attempt to come back, most teams simply can’t overcome a 30-point deficit which wastes both teams’ time.