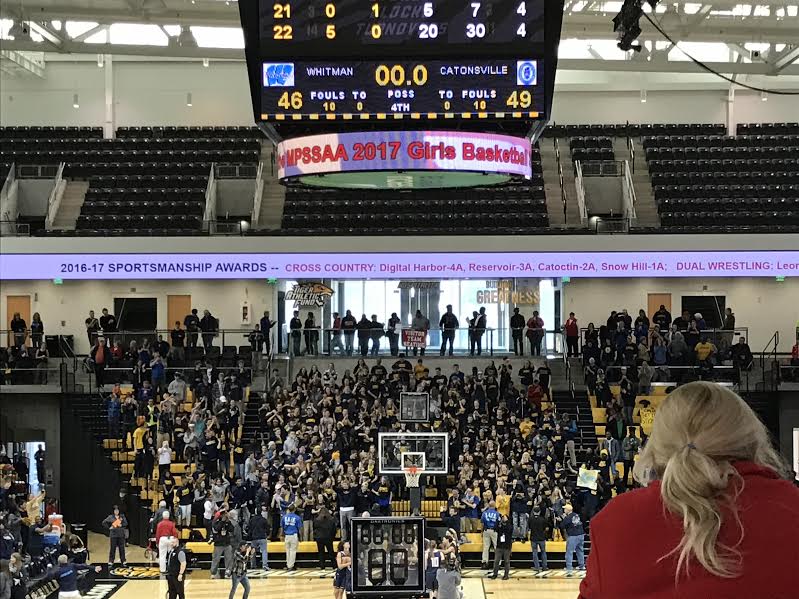 The Vikes came up one game short of a repeat state championship, falling to Catonsville 49–46. Photo by Ezra Pine.

The girls basketball team (23–5) fell to the Catonsville Comets 49–46 Saturday in the state title game in a defensive showdown and foul-filled contest.

The first and second quarters went back-and-forth, neither team taking control of the game. The Vikes ended the half leading by three, with guard Abby Meyers and forward Livy Meyers scoring all of the team’s points. Both the Vikes and the Comets struggled, both shooting below 27 percent from the field on the day.

As the game entered the third quarter, the Comets took the lead in part because of the Vikes’ foul-trouble. The Vikes committed 23 personal fouls which allowed the Comets to score nearly half of their points at the free-throw line. And while the Comets had nearly 11 more free-throw attempts than the Vikes, the refs called a fair game, Abby Meyers said.

With two minutes left in the game, the Vikes backcourt, guard Isabel Manzano and Abby Meyers, had both fouled out.

“It’s definitely tough to foul out in your last game and it’s going to hurt me for a while,” Abby Meyers said. “I played uber-aggressive and that got me four fouls. I tried to play through it and the refs called what they had to call.”

With Abby Meyers and Manzano fouled out, the squad leaned heavily on Livy Meyers who made multiple clutch shots to keep the Vikes in the game.

With just seconds remaining, after she had put the Vikes within three with two free-throws, Livy Meyers was called for traveling while taking a potentially game-tying shot. The Vikes were unable to get the ball back and the Comets dribbled the clock out.

Even though the Vikes were unable to overcome the deficit, coach Peter Kenah was proud of how his team fought until the end, even without Abby Meyers or Manzano.

“I just thought it showed so much that the lineup we had after fouling out our starting backcourt and if you’d told me six months ago that that’s who you’re going to finish with I would’ve said ‘no’” Kenah said. “That’s amazing. What a true team.”

The Vikes finish the season at 23–5 and won their third consecutive 4A west region title and made their third straight state semi-final appearance and second straight trip to the state finals.

“It was a fairytale season,” Kenah said. “I was just so proud of this group for enjoying the journey. I just couldn’t be prouder of these kids and I love them to death.”