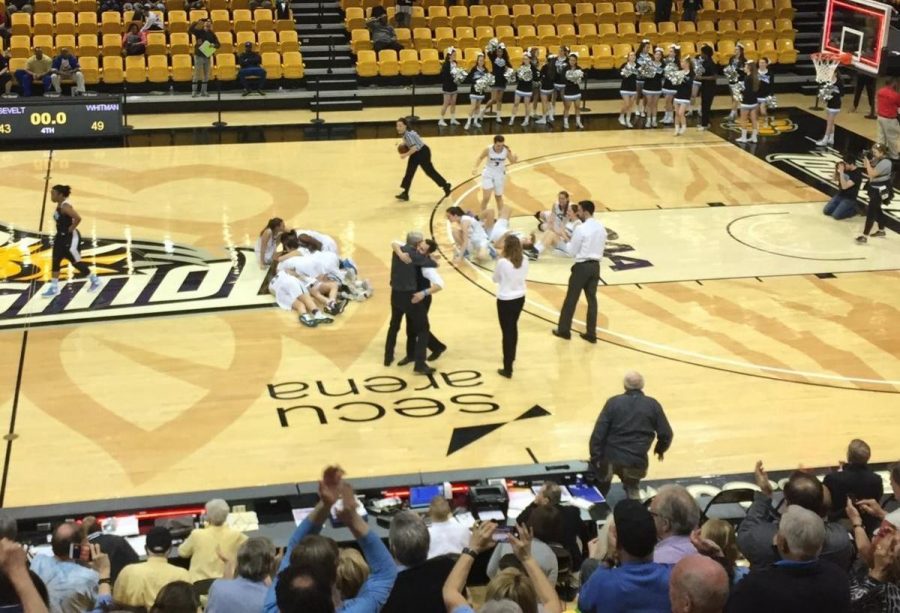 The Vikes celebrate after beating Roosevelt 49 to 43 in the state semifinal. The finals will be 3 p.m. Saturday against Catonsville at Towson University. Photo by Sam Shiffman.

The girls basketball team (22–3) defeated the Eleanor Roosevelt Raiders 49–43 Thursday behind multiple clutch shots late in the game. They’re advancing to the state finals for the second straight season.

While the Vikes held a 27–14 the lead at halftime, the squad struggled to break the Raiders’ full-court press which allowed the Raiders back in the game. Late in the fourth quarter, the Raiders erased the deficit and took a one point lead.

Despite falling behind late in the fourth and only scoring six points in the second half with just five minutes remaining in the game, the team stayed composed and found a way to beat the Raiders’ press.

“This is our second time in semis play so we knew we needed to stick together mentally and emotionally in order to win the game,” guard Abby Meyers said. “We couldn’t get down each other and start yelling at one another.”

The Vikes hit multiple clutch shots late in the game, including two fourth-quarter threes by guard Elyse Lowet to gives the Vikes the lead. Guard Isabel Manzano hit the game-clinching three from the left corner on a quick pass from forward Livy Meyers.

“I knew that I had to make that shot,” Manzano said. “I was nervous because there was more time left but when I took the shot I knew that it was in.”

Just six seconds after Manzano put the game out of reach and the Raiders missed a three, the Vikes mobbed forward Livy Meyers and guard Abby Meyers at center court. Abby had 21 points and 10 rebounds in the game while Livy had 12 points and eight rebounds.

The Vikes will play Catonsville in the 4A state title game Saturday at 3 at SECU arena at Towson.

Catonsville enters the state final at 26–2 on a 22 game win streak and they’re led by forward Jen Gast and guards Jasmine Dickey Jameila Barrett, all of whom have Division I offers.

Despite the challenge Catonsville poses, the Vikes are still confident and hungry to win another state title.

In addition to getting another shot at a state title, Saturday will also be first team All-Met guard Abby Meyers’ last game for Whitman and a senior class that has been to three consecutive state semi-finals appearances.