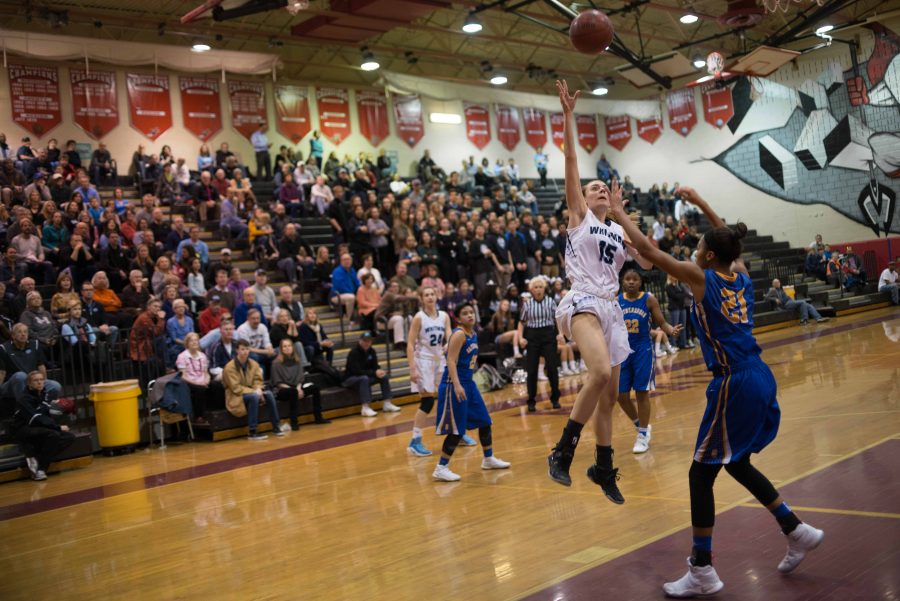 Guard Isabel Manzano goes up with a hook shot in the team's regional final victory over Gaithersburg. Photo by Tomas Castro.

The girls basketball team (21–3) obliterated the Gaithersburg Trojans 69–46 to advance to their third straight state semifinal appearance in an all around dominant performance.

The Trojans jumped out to a quick 6–0 lead early on, but the Vikes responded swiftly with 20 unanswered points sparked by a three by guard Isabel Manzano.

“Everyone was hitting their shots but our defense was incredible and it really limited their scores and got our confidence up,” guard Elyse Lowet said about the 20–0 run in the first quarter.

After the first quarter, the game wasn’t close as the Vikes never led by less than double-digits for the rest of the game. By halftime, their lead had increased to 27.

Part of the reason the Vikes dominated all facets of the game was because of their intensity and early foul-trouble for the Trojans. The squad attacked the basket relentlessly and took defenders one on one, taking advantage of the Trojans’ aggressive man defense.

“I think we just wanted it more than they did,” Lowet said. “We also shared the ball really well and our shooters did a great job of knocking down the shot. We tried getting the ball inside more and forcing fouls on the other team which really worked; two of their best players fouled out with a lot of time in the second half.”

The squad was led by guard Abby Meyers with 26 points, forward Livy Meyers with 17 and guard Isabel Manzano with 11.

The Vikes will face the Eleanor Roosevelt Raiders in the state semifinals thursday at SECU Arena at Towson University at 5.

Earlier in the season, the Vikes beat the Raiders 46–34 behind 22 points from guard Abby Meyers. However, the Raiders were without their top scorer guard Octavia Wilson who averages 18.1 points per game and is the Raiders’ third leading rebounder. Currently, the Raiders are ranked fourth in the D.C. area by the Washington Post while the Vikes are ranked twelfth.

“We know it’s going to be a really tough game but we know that if we play the way we know how to play we can come out on top,” Lowet said.