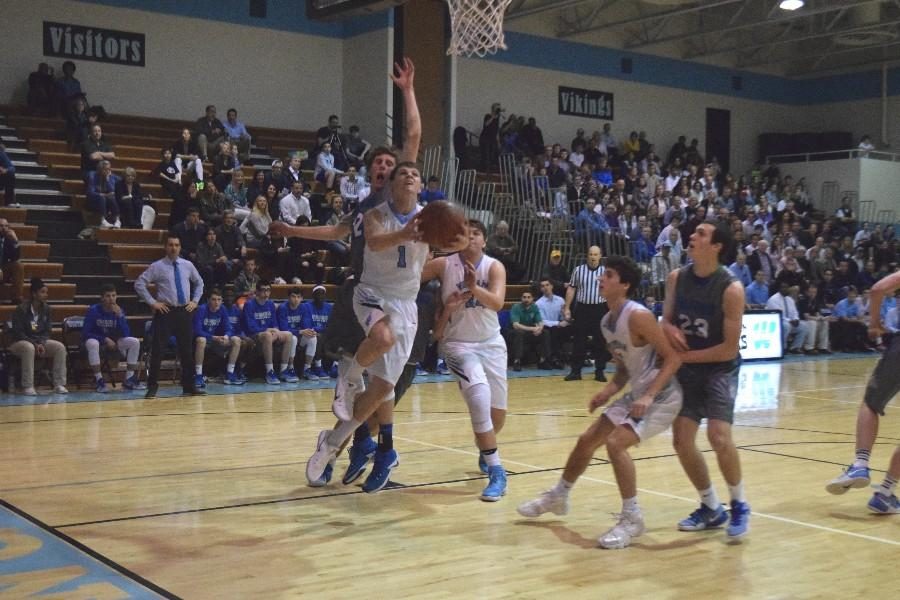 Guard Jack Mclelland goes up for a contested layup as part of his career-high 24 point performance. Photo by Rachel Hazan.

The boys basketball team (17–5) advanced to the next round of the playoffs after slipping past the Churchill Bulldogs 65–62 in a nail-biting overtime contest.

The Vikes closed the first half with a dominant 14–4 second quarter. However, the Bulldogs retaliated in the fourth quarter, sending the game into overtime with a game tying three-pointer to cap off a 24–14 run.

Lead by guard Jack McClelland, who had a season-high 24 points, the Vikings were able to seal their victory after one extra period.

“I was telling myself the whole game that we weren’t going to lose to Churchill at home, especially for me when it’s my senior year,” McClelland said. “I was going to do whatever it took to get the win.”

Guard Alex Sanson and forward Max Oppenheim contributed 13 and 10 points respectively, and shot a combined 13-14 at the free-throw line.

The Vikes’ next opponent is RM, whom they’ve lost to twice in the regular season.

“We got the win and now we’re just looking to build off the momentum we had after the win,” McClelland said. “We are known for playing our best basketball at the end of the season and into playoffs so our chemistry is at the level it needs to be to make a run.”

The Vikes play at Richard Montgomery Thursday 7 p.m. in the sectional finals.