The Black and White • December 13, 2016 • https://theblackandwhite.net/53798/sports/december-9-boys-basketball-sneaks-by-gaithersburg-51-50-girls-basketball-defeats-gaithersburg-68-44-behind-dominant-second-half-hockey-blows-out-wj-8-1/ 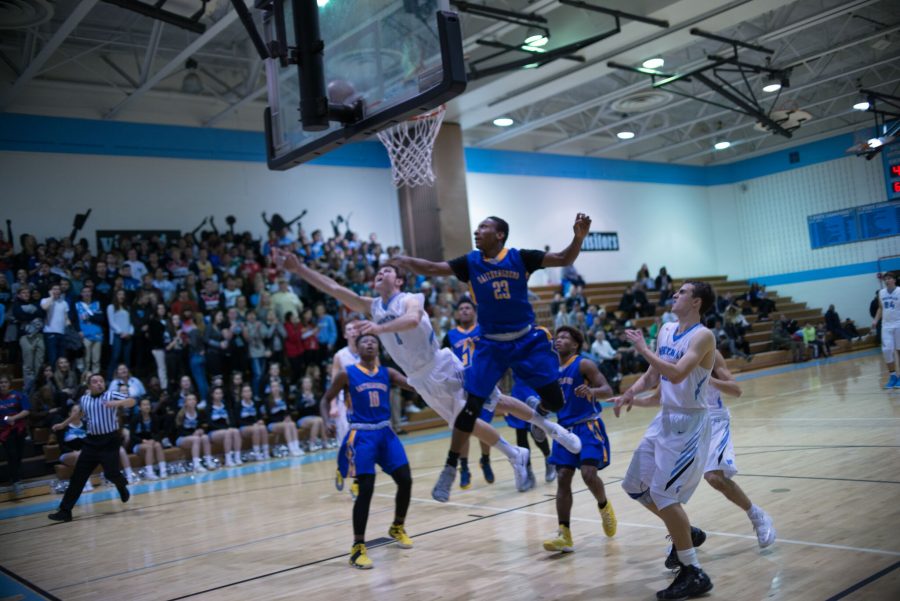 Guard Jack McClelland goes up for a contested layup against Gaithersburg. Photo by Tomas Castro.

Boys basketball (2–0) snuck past the Gaithersburg Trojans 51–50 on Friday night in the Vikes’ home opener.

Neither team could pull ahead in the gridlock contest, with no team leading by more than four points at the end of a quarter.

The Vikings dominated the boards, lead by center Max Oppenheim who grabbed 18 of the team’s 34 rebounds. Guard Joey Squeri has lead the team in scoring in consecutive games, tallying a season-high 16 points.

The Vikes next game is Saturday against Georgetown Prep.

The girls basketball team (1–0) defeated the Gaithersburg Trojans 68–44 in their first game of the season behind a dominant second half.

The Vikes got off to a slow start and were tied with the Trojans at the half. However, the squad took control the second half, outscoring the Trojans 25–8 in the third quarter. Abby Meyers lead the team offensively, scoring 31 points and making four three-pointers.

The team’s next game is Saturday against the Eleanor Roosevelt Raiders at Roosevelt.

The hockey team (4–1–1) overtook the Walter Johnson Wildcats with an 8–1 win.

The squad entered the game strong with four key goals scored in the first quarter. The Wildcats took one goal back into the second quarter but the Vikings quickly matched them. Then, the Vikes rounded the game out with three goals: one scored by Douglas Bruchalski and two by Tyler Crist in the third quarter.

Next, the team plays the rival B-CC Barons on Wednesday.