The Black and White • November 30, 2016 • https://theblackandwhite.net/53547/news/hate-vandalism-prompts-county-council-response/ 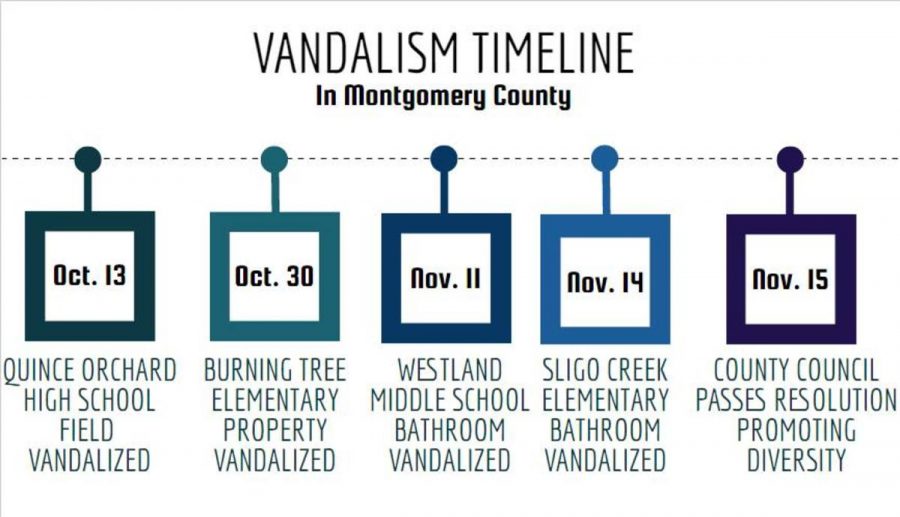 The Montgomery County Council passed a resolution reaffirming its commitment to upholding diversity and denouncing hateful actions Nov. 15 in response to recent defacements to public schools and churches.

“It’s disturbing to people who are targeted, primarily, but it’s a degradation for all of us to see those kinds of ideas plastered around public places,” English teacher Prudence Crewdson said.

In a press release, the City Council stated that the resolution was intended to reinstate safety and trust within the community and to condemn “anti-immigrant activity, hate speech, hate crimes and harassment in Montgomery County.”

While the events mirror the surge of racially-charged occurrences nationwide following the election, the council emphasized the statement was nonpartisan in their press conference following the signing of the resolution.

“We’re absolutely not here to denounce a political party or a candidate,” council member George Leventhal said. “We’re here to denounce conduct that is harmful to civility and our ability to get along.”

Students and teachers did acknowledge that the events may have been influenced by election results.

“It’s kind of tricky to be nonpartisan when one of the people, in my opinion, has fanned the flames of racism, homophobia, sexism and Islamophobia,” Crewdson said. “I understand it’s important to keep your political views out of school, but I think the county council has every right to affirm the values that they want to affirm.”

Senior Aidan Doran said he thinks the actions are a short-term effect of the election.

“I think just the effect itself is bringing people out and bringing out the worst in people,” Doran said.

All parties interviewed still agreed that the council’s statement is a step in the right direction.

“I think people who feel threatened by these comments should have someone saying that it’s wrong,” senior Claire Nagelhout said.

More than 70 percent of the county’s students are racial minorities, according to the council’s press release. Assistant principal Jerome Easton acknowledged the ever-increasing diversity of the county’s populace.

The most recent incidents within the county are not isolated. The football field at Quince Orchard High School and school property at Burning Tree Elementary were defaced with swastika imagery late October, opening hate crime investigations by the Montgomery County Police Department.

In each incident, school administrators sent emails to the school community describing the extent of the vandalism, expressing disappointment and assuring community members that that this behavior will not be condoned.

Easton advised students who may feel threatened by the hate-related vandalism to refrain from responding with more animosity.