The Black and White • November 16, 2016 • https://theblackandwhite.net/53242/feature/artist-spotlight-sophie-lieber-blends-techniques/ 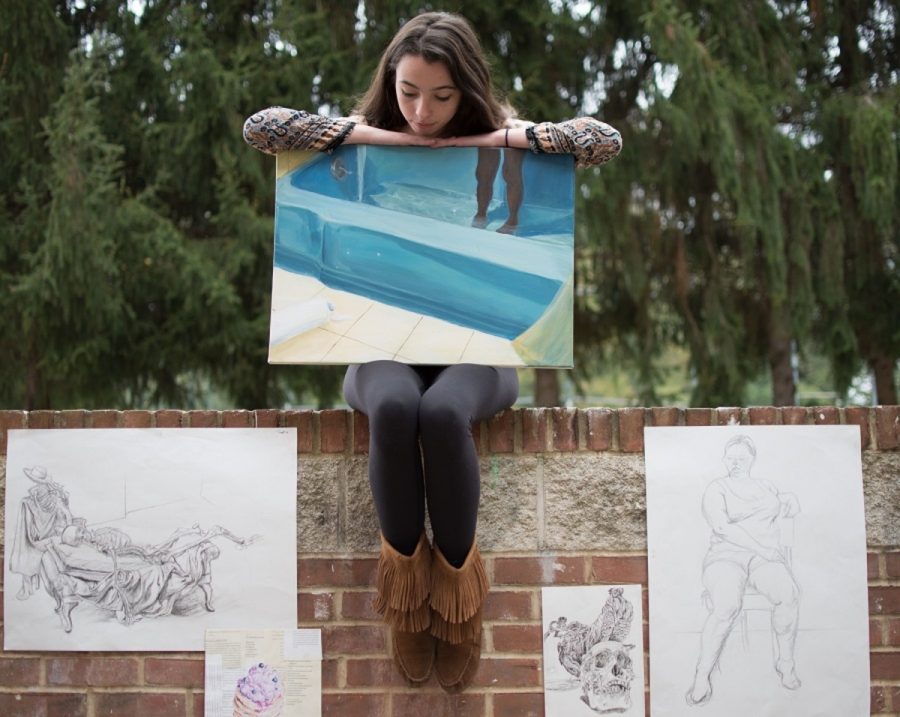 Lieber's passion for art began at a young age. She has continued her work which ranges from skulls to flowers all four years of high school. Photo by Tomas Castro.

A month ago, as you walked into school, the dark powerful hand of Darth Vader reached toward you.

This Battle of the Classes masterpiece was senior artist Sophie Lieber’s creation. The Vader exposition is one of Lieber’s many works that allow her to stand out as a Whitman artist with distinct technique and style.

“She’s this very quiet talent,” art teacher Jean Diamond said. “She’s thinking, but she doesn’t have to always broadcast. And then she produces these things that set her apart in terms of her intellectual ability to reinvent the world around her.”

Lieber has taken art classes since freshman year; however, her passion began well before high school. She started drawing at a young age, creating illustrations of princesses and animals, her mother Meredith Bowers said.

“I love that she has kept art a part of her life through the years,” Bowers said. “She has found a way to keep producing beautiful work even when she has a lot of other demands on her time.”

Lieber has participated in Battle of the Classes hallway decorating since her sophomore year.

“She’s an insane artist,” homecoming chair Keara Sullivan said. “She’s helped out a lot in past years, but this year, she really took charge of organizing it.”

This year, Lieber hoped her Vader piece would bring the whole senior hallway together.

“I really liked it because of the perspective of Vader reaching out, looming over the hallway,” Lieber said. “My goal was to make it as eye-catching as possible but at the same time, not the sole focus.”

Out of the hallways and into art classroom C-237, Lieber’s work analyzes the quotidian, the everyday happenings around her.

“Last year, she did a piece that was quite phenomenal,” Diamond said. “It was a brain of noodles, and she had hands with chopsticks picking the brains. I thought it was really a metaphor for being able to pick out the important things.”

Lieber tries to approach all of her pieces with the same attention to detail, she said.

“I recently did a painting based off of a picture I took of my younger sister’s legs and feet in the bathtub,” she said. “It was a large painting relative to other stuff I’ve done, so I was really glad with how it came out.”

Lieber also enjoys doing pen and ink drawings using crosshatching, a technique of shading with intersecting parallel lines, because she can include a lot of detail, she said.

Her ability to understand which artistic methods–like crosshatching–she should use in her pieces gives Lieber an edge for a notable career in art, Diamond said.

“I see her being very successful because she sees the vision and goes after it,” Diamond said. “She could be working for a company or brand that she could do the illustrative work for, using some of her academic ability combined with her art.”

No matter where she ends up, Lieber hopes to pursue art in college and possibly as a profession.

“I know that this is something that I’ll be doing for the rest of my life,” Lieber said.