The Black and White • November 6, 2016 • https://theblackandwhite.net/53146/sports/november-3-boys-soccer-suffers-tight-loss-to-wj-girls-volleyball-swept-by-rm/ 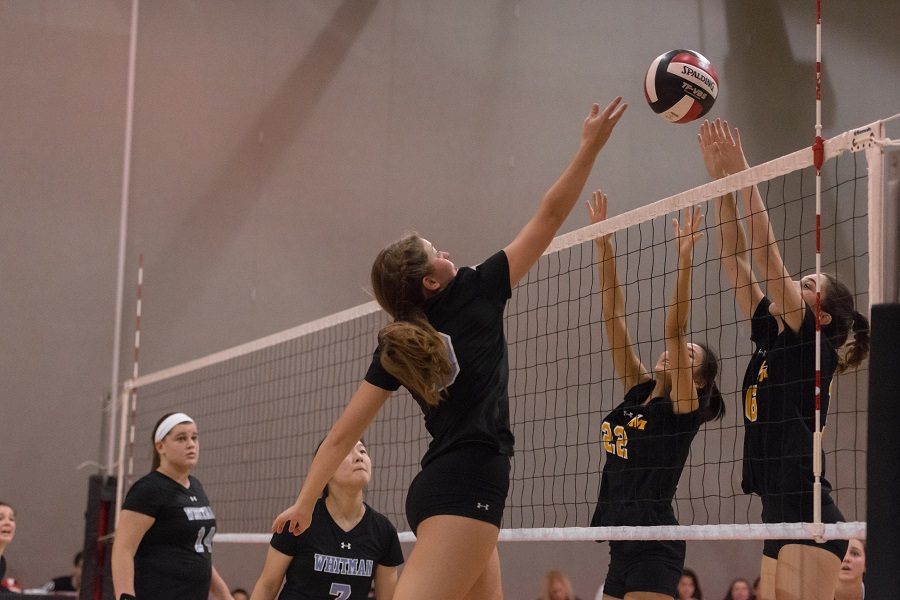 Hitter Maddie McGill goes for a spike in the team's 3-0 loss to RM. Photo by Jefferson Luo

By Kyle Layman and Sam Shiffman

The boys soccer team (14–3) fell to the Walter Johnson Wildcats 2–1 Thursday, bringing their season to a close.

Throughout the night, both defenses held strong, however both teams were able to capitalize on their few opportunities.

Due to a strong defensive performance from both teams, and a couple key saves by the Vikes goalkeeper Evan Cameron, the first half ended scoreless.

In the second half the Wildcats scored the first goal off a penalty kick, but the Vikes retaliated quickly and forward Andreas Djurhuus scored to tie the game at 1–1.

“We kept our heads up and fought even harder, as we didn’t want the season to end there,” Midfielder Lars Crovetto-Soholt said. “We attacked hard until we got the penalty that gave us the chance to equalize.”

Unfortunately for the Vikes, the Wildcats scored again on a controversial play where a Vikes defender was injured. However, no whistle was blown and the Wildcats went up 2–1.

Both the Wildcats goals came resulted from opportunities that many fans and players considered to be questionable calls.

“The first goal was a penalty that in our opinion should not have been called,” Crovetto-Soholt said. “The second time there was a collision in our box that left our the defender on the ground injured, but since the referees let play continue they were able to make an easy pass and finish through that gap .”

The Vikes were unable to come back after the Wildcats’ second goal, sending the Wildcats on in the playoffs to play in the regional finals.

The girls volleyball team (6–9) lost 3–0 to the Richard Montgomery Rockets Tuesday, getting eliminated in the first round of the playoffs.

Headed into the matchup, the Vikes were the sixth seed and RM was the third seed. When they played in the regular season, the team faced a similar result, losing 3–0.

The team will be losing five seniors heading into next year.