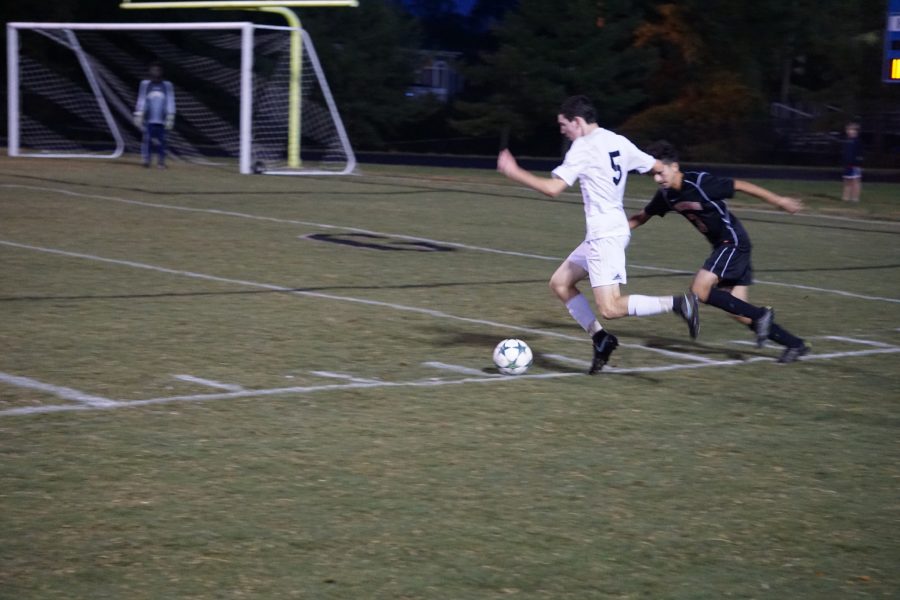 Defenseman Kevin Kaufman looks to cross the ball over the middle of the field in the team's 3–0 victory over Northwood. Photo by Lauren Gates.

The field hockey team (7–6) lost to the B-CC Barons 3–2 in overtime Thursday, getting eliminated from the playoffs.

Forward Claire Hisle netted a goal just three minutes into the game, but the Vikes surrendered two quick goals right after to go down 2–1.

The squad was trailing going into the last minute of the game until forward Caleigh Stenger scored the game-tying goal with one second remaining, sending the game into overtime.

“I thought the play was over and time had run out but the crowd was screaming and my teammates all ran over to me,” Stenger said.

The Vikes could not carry over their momentum into overtime, as the Barons netted the game winning goal, carrying them into the second round.

The Vikes were in control the entire game as forwards Andreas Djurhuus and Luciano Cahe, and defenseman Matthew Maciejewski scored one goal each.

The Vikes defense held strong as the Gladiators were unable to get any good looks on offense and were subsequently shut out.

The Vikes will look to continue their playoff run Tuesday at home against the B-CC Barons.

The girls soccer team (8–2–3) obliterated the Northwest Gladiators 11–0 in the first round of the playoffs.

The Vikes one-upped their previous outing against Northwest in which they won 11–1. This was their fourth time topping 10 points, and the seventh shutout of the 2016 season.

The Vikings dominated from start to finish, scoring a season-high nine goals in the first half. The ball was shared exquisitely, as seven of the 11 goals were scored on assists. Captain Abby Meyers lead the team with two goals; however, 10 different Vikes scored a goal.

The Vikes hope to remain undefeated on the road this season (7–0–1), and hope to carry momentum into the next playoff game at Churchill on Tuesday.

The girls volleyball team (6–8) beat to the Blake Bengals 3–2 Thursday in a tight game that saw multiple sets decided by two points.

The Vikes got off to a slow start and struggled finding their rhythm early on but picked it up as the game wore on, Libero Lucia Mitnik said. The team’s better performance later in the game was sparked by outside hitter Olivia Personeni, who had multiple kills.