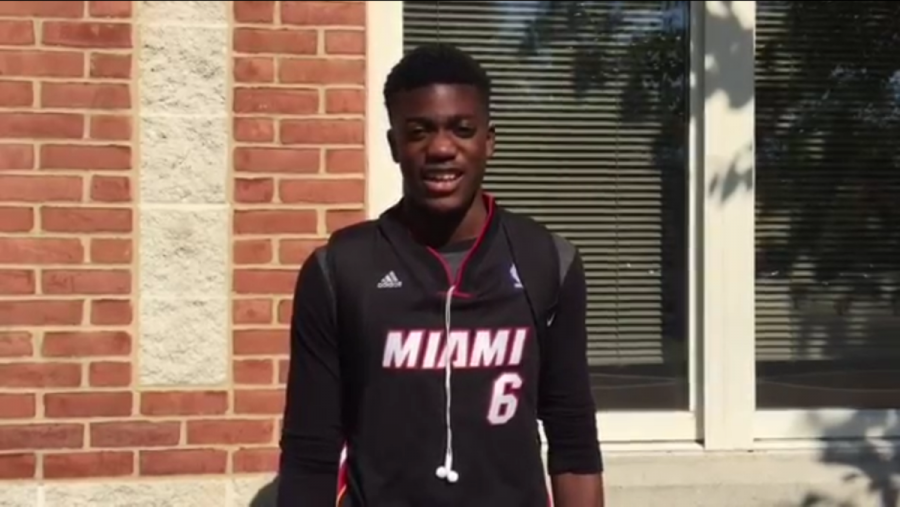 Two super teams currently reign supreme in the NBA. Last year, the Golden State Warriors and the Cleveland Cavaliers coasted through the regular season with conference-leading records. The two then proceeded to fight their way through the playoffs until they reached their inevitable meeting in the championship. This matchup culminated with a heart-wrenching game 7 that saw the defeat of the 73-win Warriors and garnered the city of Cleveland their first sports championship in 52 years. The Warriors and Cavaliers, led by Stephen Curry and LeBron James respectively, have a championship rematch all but set in stone.

Kyle Layman:
Rookie of the Year: Joel Embiid (PHI)
Although he was drafted two years ago, Joel Embiid has been on the injured reserve for both of those years and is therefore eligible for rookie of the year. Joel Embiid is a strong athletic center who can shoot from three-point range and is looking to lead the Sixers to an improved record. As long as the Sixers don’t finish last in the Eastern Conference and Embiid plays healthy minutes, he will be a strong candidate for Rookie of the Year.

MVP: James Harden (HOU)
Harden finished second and ninth the past two years in MVP voting, but this may be the year he finally wins it. While his defense can be lackluster at times, on offense he carries the team on his back as he averaged 29 points per game last year. He can attack the basket, pull up from mid range, and knock down threes. With Kevin Durant and Steph Curry on the same team, and Lebron James focusing his energy primarily on the playoffs, Harden will have the spotlight pointed at him and his offensive dominance.

Breakout Team: Phoenix Suns
Last season could have gone a lot better for the Suns if it wasn’t for injuries to guards Eric Bledsoe and Brandon Knight. This year, the team will have those players back healthy, in addition to veteran free agent additions Jared Dudley, Tyson Chandler and Leandro Barbosa. If younger players such as Devin Booker continue to develop, and the team is able to gel together with the veterans, then the Suns could be vying for a playoff spot in a highly competitive Western Conference.

Breakout Player: Devin Booker (PHX)
Last year, Booker sat behind Eric Bledsoe and Brandon Knight, but when they got injured, he stepped up and took full advantage of the opportunity. With four games of over 30 points, and shooting 34 percent from three and 42 percent from the field, Booker showed he was capable of putting up big numbers. After last year’s performance and an impressive summer league showing, Booker should be in line for more minutes, leading the Suns to an improved season.

Sam Shiffman:
ROY: Brandon Ingram (LAL)
Despite multiple free agent acquisitions, the Lakers still have few players who can score on a consistent basis. Expect Ingram to be one of the main components of the Lakers offense, and take a lot of shots. Ingram’s unique combination of size and three-point shooting ability will help him lead the young Lakers offense.

MVP: Russell Westbrook (OKC)
Kevin Durant’s decision to leave in the offseason has left the Thunder with only one true star: Russell Westbrook. This will force Westbrook to carry the offensive load, and he will take more three-point shots. In addition to the added scoring responsibilities, Westbrook will continue to rack up triple-doubles.

Breakout Player: Harrison Barnes (DAL)
Barnes struggled mightily last year in the playoffs but should bounce back this year as he will have a bigger role than he did in Golden State. Expect Barnes’s three point shooting to improve; that and his tight defense will only help his emergence as one of the top players in the league. In addition, Barnes’s versatility will help the Mavericks make the playoffs and possibly the Western Conference semifinals.

Ben Levin:
ROY: Ben Simmons (PHI)
It may seem like a cop-out to choose the number one pick in the draft as the Rookie of the Year, but the stars have aligned for the one-and-done LSU product. The 76ers’ only talent lies in their abundance of young big men. While Simmons is registered at 6’10”, he should serve as the primary ball handler, and will dominate the stat line in Philadelphia.

MVP: Russell Westbrook (OKC)
Kevin Durant’s move was the biggest free agency move since LeBron’s nationally televised betrayal of his hometown Cleveland Cavaliers. The fans of Oklahoma City desperately need reassurance in their team, and it will come in the form of Russell Westbrook. While the Thunder won’t be as good without Durant, Westbrook has averaged 28 points, 7.1 rebounds and 8.4 assists in games without him. With the possibility of averaging a triple-double per game, the MVP trophy is Westbrook’s to lose.

Breakout Team: Milwaukee Bucks
Three seasons ago, the Bucks were the worst team in basketball. Last season, not only did the Bucks hand the best team in NBA history (the Warriors finished last year 73–9, the best record in NBA history) their first loss of the season, but they nearly defeated them in Oakland. However, the Bucks severely underperformed and missed the playoffs as a result. The youngest roster in the NBA has more experience under their belts, and will make an unexpected appearance in the Eastern Conference semifinals.

Breakout Player: Dennis Schröder (ATL)
After the move of Jeff Teague, Schröder is now the starting point guard for a Hawks team full of veterans. Spending three years behind Teague in the lineup has allowed Schöder to develop into a starting caliber player. Each season he has improved his assists, points and steals per game. With the backcourt fully in his control, Schröder is in prime position to lead the Hawks to their 10th consecutive playoff berth, and win Most Improved Player honors for himself.

Daniel Weber:
Rookie of the Year: Buddy Hield (NOP)
Hield garnered four national player of the year awards during his senior season at Oklahoma, in which he propelled the Sooners to a final four appearance. The scoring machine averaged 25 points per game in college last year and exploded for even better numbers during the NCAA tournament. Aside from an overworked Anthony Davis, the Pelicans have few durable playmakers on their roster. With the Pelicans’ dearth of talent and the injuries to Tyreke Evans and Jrue Holiday, Hield will have many opportunities to make his presence known during the 2016 NBA season.

Most Valuable Player: Steph Curry (GSW)
Although Curry did not live up to lofty postseason expectations last year, his 2015–2016 regular season performance is unparalleled. He averaged over 30 points per game and shot over 50 percent from the field while improving his defense immensely from past years. Many think that the pressure on him will decrease with the Warriors’ addition of Kevin Durant. However, due to the depletion of the Warriors’ bench, Curry will be tasked with a similar burden to that of last year. Unlike last year’s playoffs, Curry will not disappoint.

Breakout Team: Boston Celtics
The Celtics made it to the postseason each of the last two years, but were swept in the first round both times. After the offseason acquisition of Al Horford, the Celtics are finally in position to push further into the playoffs. Before his arrival, the Celtics were exploited in the frontcourt due to a lack of a legitimate presence at either the center or power forward position. Now, the Celtics have an offensive and defensive anchor to build around in Horford. This is what the team has needed to make the jump to legitimacy.

Breakout Player: Jeremy Lin (BKN)
Yes, Linsanity already broke out a few years ago with the New York Knicks. However, his career since then has been mired in mediocrity. He has been relegated to the status of a bench player by each of the teams he played for since. This year, he takes the reigns of a struggling Brooklyn Nets team with few scoring options. Although the team as a whole will continue their lackluster performance of recent years, Lin will have no shortage of scoring opportunities this season. One thing he has consistently done during the past few years is score.

Joey Squeri:
ROY: Kris Dunn (MIN)
Dunn possesses a skillset that any team would love to have; he’s a great ball-handler, has a consistent jumpshot and can lock down any opposing guard. He was widely regarded by NBA general managers as the best defensive player in the draft, averaging 2.5 steals per game and winning the Big East’s defensive player of the year two years in a row. At 6’4” and 205 pounds he has an ideal frame for a modern NBA point guard, and paired with the other young talent in Minnesota he should be a vital piece of one of the best up and coming teams in the NBA.

MVP: Lebron James (CLE)
Last year, fans everywhere began to think that Stephen Curry was the best player in the NBA; they were proven completely wrong in the NBA Finals. Nearly averaging a triple double in the finals (29.7 ppg, 11.3 rpg, 8.9 apg), he completely outplayed Curry on his way to leading the Cavaliers to their first title in NBA history. Now with Kevin Durant’s departure adding even more motivation, James will need to build off his finals performance if the Cavs have any hope of repeating as champions; that’s exactly what James will do.

Breakout Team: Detroit Pistons
With Stan Van Gundy as both the coach and general manager, the Pistons broke through last year and made the playoffs as the eighth seed. Reminiscent of the old “Bad Boys” Pistons of the 80’s and 90’s, this squad is built of physical interior play and rebounding dominance finishing ninth in total defense and second in team rebounding last season. Last year’s duo of rebounding machine Andre Drummond and Reggie Jackson will be given some more help this year with the development of Stanley Johnson and the late acquisition Tobias Harris and the Pistons will rise up the ranks of the Eastern Conference.

Breakout Player: Karl-Anthony Towns (MIN)
Picking last year’s rookie of the year as a breakout player seems illogical, but Towns’ versatility and limitless ceiling can turn him into a potential MVP candidate for this year. Even after averaging a double-double last year with 18.3 points and 10.5 rebounds, new head coach Tom Thibodeau will get the most out of Towns’ potential, like he did with Taj Gibson in Chicago. If Towns can stay healthy the entire year, he will be vying for first-team NBA or even the MVP.