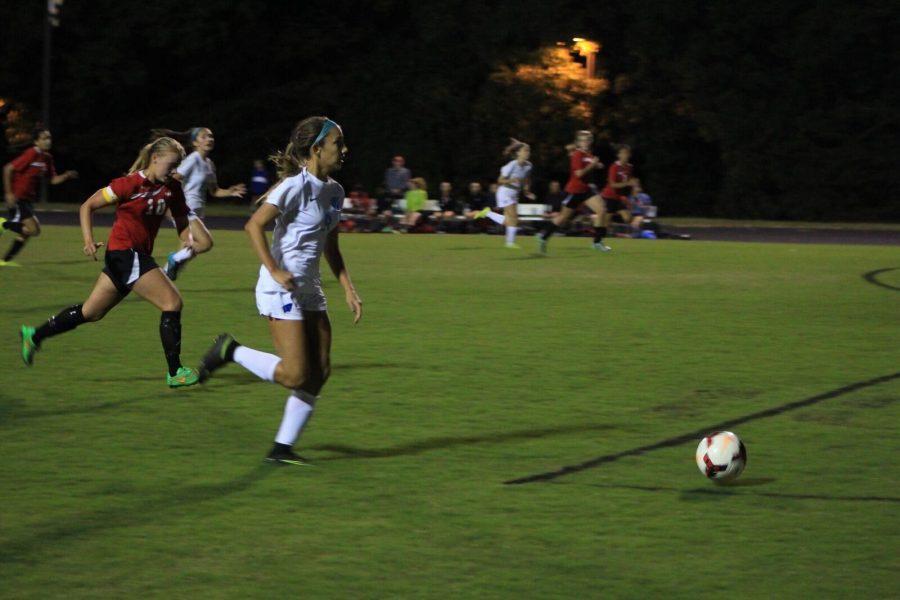 Defender Caroline Smith driving deep into the opponent’s defense in a tight contest against Blair. Photo by Reed Leventis.

The girls soccer team (6–1–1) edged out the Blair Blazers 1–0 for the Vikes fifth consecutive victory and third consecutive shutout.

The lone goal of the contest was scored by midfielder captain Chelsea Cahill in the first half. Two of the remaining four regular season games are on the road, where the Vikings are 4–0.

The next game is away against the Einstein Titans on Saturday.

The boys soccer team (8–2) extended their winning streak to four games as they shutout the Blair Blazers 2–0.

The Vikes jumped out to a quick lead scoring two goals in the first half. Their defense held strong the entire game as they didn’t allow a goal.

The team was lead by forward Adam Deutchman who scored two goals, and goalkeeper Evan Cameron who had fve saves.

The squad’s next game is Saturday away against the Einstein Titans.


The field hockey team (5–3) triumphed over the Blair Blazers 2–0 Tuesday, as the Vikes defense notched their third shutout of the year.

Forwards Clare Hisle and Hannah Lenkin carried the Viking offense, each scoring once.

The Vikes next play Wednesday away against St. John’s.


The volleyball team (4–4) fell to the Poolesville Falcons 3–1, despite a stellar performance by outside hitter Olivia Personeni.

The team’s next game is Thursday at home against the Walter Johnson Wildcats.

The girls tennis team (10–0) conquered the Sherwood Warriors with a 7–0 shutout Tuesday.

Next, for their final game of the regular season, the Vikings take on the Quince Orchard Cougars away on Wednesday.