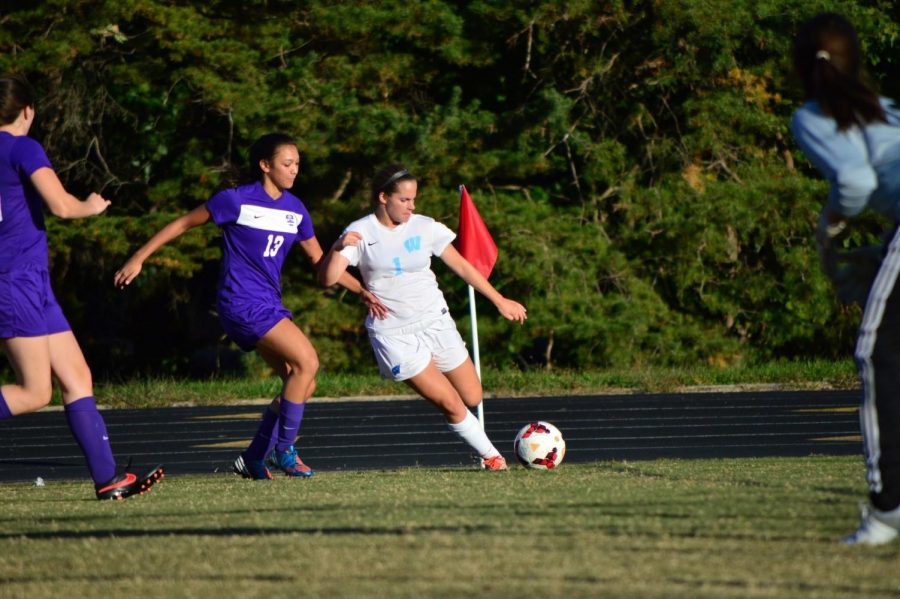 After finishing last season with a 10–7 record, the boys soccer team is looking to have another successful season, making a deep run into the playoffs.

Last season the team graduated many key players, but the Vikes have players ready to step up this year.

“Ryan Machado and Gianni Rassetto are definitely at the same level as the starters and can replace the seniors,” center back Dylan Reid said.

To improve upon last year and reach the championship, Reid believes it is essential the team strengthens its defense.

“We will have to concede less goals than we did last year,” Reid said. “If we solidify our defense we will do well.”

If all goes well, the team is hoping to bring home another championship for Whitman, which would be their second in three years.

“Our goal is to win our 10th state championship,” Reid said. “And we expect that we can do very well and even win if everyone is healthy.”

The girls soccer team is coming off a successful 11–2 season, with little competition; however, the team faced an early exit in the first round of the playoffs.

This year the team retains many of their varsity players from last year, while adding a handful of sophomores and freshmen to the roster. With only seven graduating seniors after this season, the team has maintained a youthful group while still tearing up the competition.

Losing in the first round last year has only been more motivation for this season, as the Vikes hope to regain their championship form from two seasons ago.

“It makes us want to go back out there and prove ourselves,” goalie Lauren Lerner said. “We still have lots of talent on our roster, so we’re going for a deep run again.”

After a devastating loss to Churchill in the fifth set of the sectional semi-finals last year, the girls volleyball team is looking to have another successful season behind a new coach.

Kristin Jehle is entering her first year coaching the Vikes, as the team’s third coach in the past three years.

“Her coaching style is a lot different than the coaches last year,” outside hitter Claire Mordan said. “She has already helped us improve a lot on little things, which have made a huge difference.”

In addition to a focus on the basics, Jehle has installed newer and more complex plays. Jehle also brings experience and a positive attitude to the team, which has helped her quickly earn the respect of the players, outside hitter Natalie Chen said.

“She does a really good job transferring her experience over to being a great coach and teaching us new skills and tricks,” Chen said.

Following an undistinguished 4–6 finish to the 2015 season, the football team aims to bounce back and claim a playoff berth with a successful 2016 campaign.

“We have a lot of our skill guys back,” Coach Jim Kuhn said. “That’s definitely going to be the strength of the team.”

“We have a lot of new guys on the line,” Kuhn said. “That’s going to be the big question mark. If they can pull together and do some good stuff, we’ll be successful. We have some really good athletes, it’s just a matter of trying to create space for them.”

Coming off an 8–5 season last year, the field hockey team looks to continue their winning ways this fall.

Last season, the Vikes were anchored by a stingy defense, shutting out their opponents five times. The squad expects another tough defense this year, especially in the net.

“Frances, our goalie, is really stepping up and helping us out,” co-captain Elizabeth Holden said.

The Vikes lost some key seniors, but Holden says that a talented junior class will be able to replace the lost production.

With all these new pieces, the squad has put more emphasis on teamwork and camaraderie in addition to skill work.

“Our team wants to bond together and really create a great team environment,” forward Zara Memon said. “We also want to work on our passing and conditioning to enable us to win against our rivals B-CC and Churchill.”

The squad was 0–2 against B-CC and Churchill last year, and after a playoff loss vs. Walter Johnson, the Vikes look to bounce back in conference play.

Last year, the girls tennis team concluded their regular season with a perfect 12–0 record, then finished off the year with doubles team Carina Greenberg and Sarina Wahl walking away with a state championship title at the MPSSAA state tournament.

With new freshman talent Eve Gold and many strong returning players, the team is hoping for the same outcome.

“I think the team should do really well again this season like last year,” senior Carina Greenberg said. “The team dynamic and skill are strong this year, our freshman class is really strong, and we didn’t lose many players.”

The squad has been training hard during practices and it’s been paying off during pre-season scrimmages against some of the area’s top ranked private schools.

“So far the scrimmages are going very well for us. Some of them get pretty close but they’ve been really good practice for the regular season,” junior Danielle Berman said.

While scrimmages against private schools have been going well for the team, some of the local public schools may pose tougher competition.

“Wootton and Churchill are definitely our biggest rivals, so I’m most excited for those matches,” Berman said. “My expectations are obviously to win those matches and hopefully do well in counties too.”