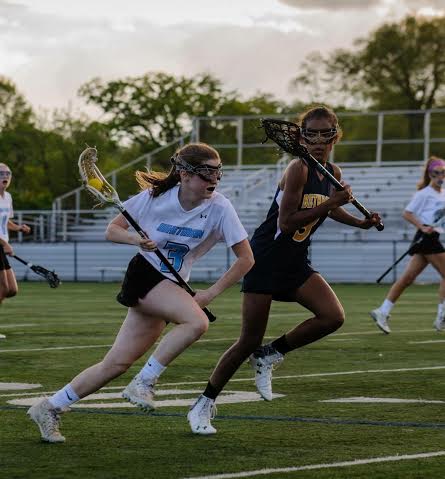 Attacker Gaby Svec pushes the ball up the field for the Vikes. The Vikes had a dominant attack in the second half. Photo courtesy Neil Rubino.

The girls lacrosse team (11–2) demolished the B-CC Barons Saturday 20–8, advancing to the sectional finals of the playoffs.

The Vikes got off to slow start, and only led the Barons 7–5 at halftime.

“It actually took us a while for us to get in our groove and work as a team,” attacker Gaby Svec said. “We kept forcing passes on attack and didn’t talk as much as we usually did on defense.”

However, the squad pulled away from the Barons after halftime behind a dominant offensive performance. The Vikes were led offensively by midfielder Eden Gray, who scored multiple goals and draws for the squad.

“Once we won the draws, we went straight to goal and scored almost every time,” Svec said. “Our transitions looked amazing because instead of running the ball from post to post, we worked as a team and passed the ball through the midfield.”

Defensively, goalie Claire Hisle shut down the Barons offense, and made multiple saves to preserve the Vikes’ lead.

The Vikes’ next game will be Monday against the Churchill Bulldogs at 5:30 at Gaithersburg. The game was supposed to be at Whitman, but was moved due to rain.