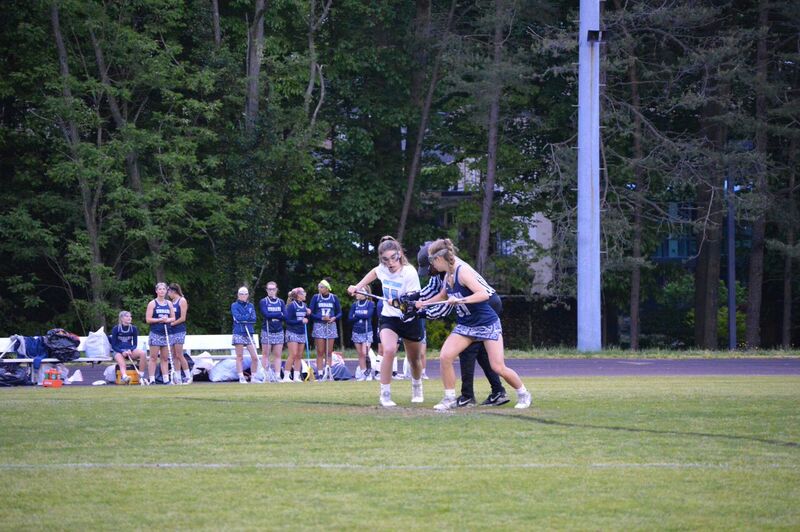 Midfielder Eden Gray fights for possession of the ball against an Urbana defender. Gray scored two goals in the team's win on senior night. Photo by Valerie Myers.

[score id=”50202″ align=”right”]
The girls lacrosse team (10–2) smothered the Urbana Hawks 13–3 in their last game before playoffs, despite a slow start offensively.

Unlike previous games, the Vikes struggled on offensive early on, and only scored one goal in the first 10 minutes of the game. But the squad kept the game close, thanks to their suffocating defense and multiple Urbana turnovers.

“We came in with a lot of energy with it being senior night and played aggressively from the very start,” defender Maddy Russell said.

But the squad bounced back, and scored eight goals in the last 15 minutes of the half. Midfielders Eden Gray and Maddy Kostopulos and attackers Hannah Ginsky and Gaby Svec each ended the half with two goals.

As the game progressed, the team began to pull away from the Hawks, taking a 9–2 lead into the half.

The Vikes continued their dominance in the second half, and maintained their lead.

The squad enters the playoffs on a six game winning streak and will be a top seed in their region.

The Vikes’ next game will be a home playoff game TBD.