The Black and White • May 8, 2015 • https://theblackandwhite.net/44714/feature/nyu-graduate-performs-one-woman-play-to-life-lchaim/ 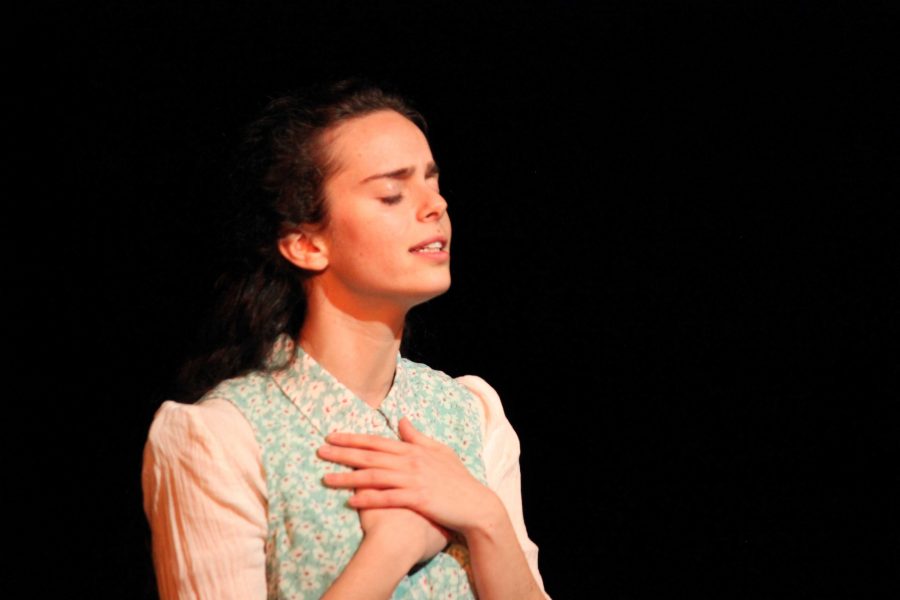 Holocaust survivor Edith Lowy has shared her story countless times. But this time, Lowy’s story was told in a very different way.

NYU graduate Arielle Goldman wrote, directed and performed a one-woman play entitled “To Life, L’Chaim!” based entirely on Lowy’s experiences in the Holocaust. Family, friends and other members of the community filled the auditorium at Charles E. Smith Jewish Day School (CESJDS) April 26 at 7:30 p.m.

Goldman first heard Lowy’s story when she was in elementary school at CESJDS, where Lowy was a teacher. Although Lowy omitted some of the more difficult details, the story resonated with Goldman. She was inspired to write the play, years later, as part of a Freeplay production during her final semester of NYU’s Graduate Acting Program.

The play told the moving and powerful story of the horrific death march during which thousands died just days before liberation, of Lowy’s permanent separation from her mother, and even of the loss of Lowy’s brother. Her father was forced to bury his own son along with hundreds of other children.

Despite the hardships she suffered, Lowy has dedicated herself to positively influencing those around her rather than dwelling on her Holocaust experiences.

“I have seen what hate can do and I cannot be a part of it,” Lowy said. “Life is short and there are many wonderful, beautiful things in the world and I’d rather concentrate on those.”

Perhaps as a result of this mindset, Lowy is surrounded by family and friends who adore and care about her deeply.

“I think Edith is just amazing, period,” said Thomas (Thom) Fritz, a friend of the Lowy family for over 30 years. “Just knowing her is an honor.”

While Lowy maintains a positive outlook, Goldman said that, as an actor, it was emotionally difficult to portray her devastating tale.

“It feels like you take a deep breath, and you go onstage, and have to suspend your own disbelief of the story,” she said. “You don’t really take your full real breath until it’s over.”

Although the story is hard to hear, Fritz was impressed that Goldman told it so accurately and in such a rich and engaging manner.

“I think it was incredibly well done,” he said. “She’s making this story real for the next generation. People who didn’t know about it, people who probably saw it in movies, read it in books but didn’t really know if it happened, it’s going to become real for them.”

Producing the show was no easy feat, however; Goldman said it took about two months to write and prepare. She started by sending a Facebook message to her classmates from CESJDS, asking what they remembered of Lowy’s story.

Because there was so much information, Goldman decided to contact Lowy directly. The two emailed, Skyped and talked on the phone, sometimes for hours. Goldman said she would record or take notes while they were talking.

“I realized it was a very large story and if I was going to tell it, I needed to tell it well,” she said during the Q&A after the play.

As a result of her research, Goldman said she became intimately familiar with and internalized much of Lowy’s story.

“It feels like we’ve shared something very important together,” she said. “I’m not a part of their family, but it feels like there’s a string being made in connection.”

“We’ve seen the story many times but to see Arielle do it was such a gift,” she said. “I feel like she could do what we couldn’t do, for my mom and for the kids. So that to me is the most amazing, wonderful thing. It really shows what mom did.”