The Black and White • February 20, 2014 • https://theblackandwhite.net/36443/feature/junior-band-magnetic-symphony-wins-battle-of-the-bands-alumni-band-performs/ 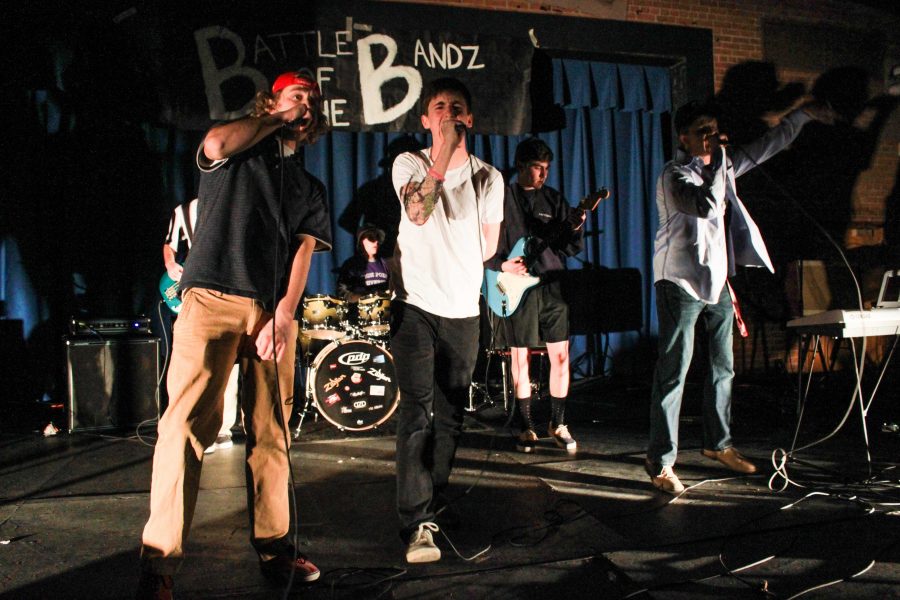 Six senior boys perform "No Sleep Till Brooklyn" by the Beastie Boys, which amped up the crowd at Battle of the Bands Wednesday night. Photo by Tyler Jacobson.

Although many go to Savoy or Firefly for a night of blaring music and wild dancing, they really need only go to the Whittier Woods Auditorium.

After the bands performed, audience members voted for their favorite by placing donations to the Leukemia and Lymphoma Society in boxes designated to each group. The band with the most donations was deemed the winner.

This year’s victor was junior-boy band Magnetic Symphony for their performance of “The Pretender” by the Foo Fighters and an original song called “Funk Off.” They played Maroon 5’s “The Sun” as an encore.

Junior Adam Glastris, the band’s drummer, said he was surprised that his group won.

“It’s kind of crazy, I definitely wasn’t expecting it, so that’s really cool,” he said.

In addition to reveling in Magnetic Symphony, the audience was particularly hyped during the Beastie Boys’ performance.

The group played “Fight for Your Right” and “No Sleep Till Brooklyn.” The band consisted of seniors Carson Lystad, Joey Williams, Frank Beiser (rappers), Jason Frankel (bass), Ryan Savage (guitar) and Jordan Wolff (drums). While the three rappers passionately roared into the microphones, the front row of the audience fist-pumped along with them.

“My favorite part was probably seeing how excited people got when the Beastie Boys performed and everyone just seemed really into it,” senior Kate Goldberg, Battle of the Bands coordinator, said.

The audience also enjoyed a performance by Dale and the ZDubs, a Whitman alumni band. Lystad has played with the band before, and was invited to join them and play a solo on the last song.

Dale Rodman, one of the lead singers of the group, said he was enthusiastic about performing for the event.

“When Carson offered us to play here and help raise money for the Leukemia and Lymphoma Society we weren’t going to say no,” Rodman said.

Goldberg said she thought the night was a success, especially considering the scheduling complications due to snow. The event was originally scheduled for last Wednesday.

“It went surprisingly well. We weren’t expecting a huge turnout because of the change of date and location, but given the circumstance we had an awesome turnout,” she said. “All the bands did great, including Dale and the ZDubs who were awesome.”