The Black and White • February 13, 2014 • https://theblackandwhite.net/36335/feature/5th-annual-guy-auction-raises-blank-for-leukemia-lymphoma-society/ 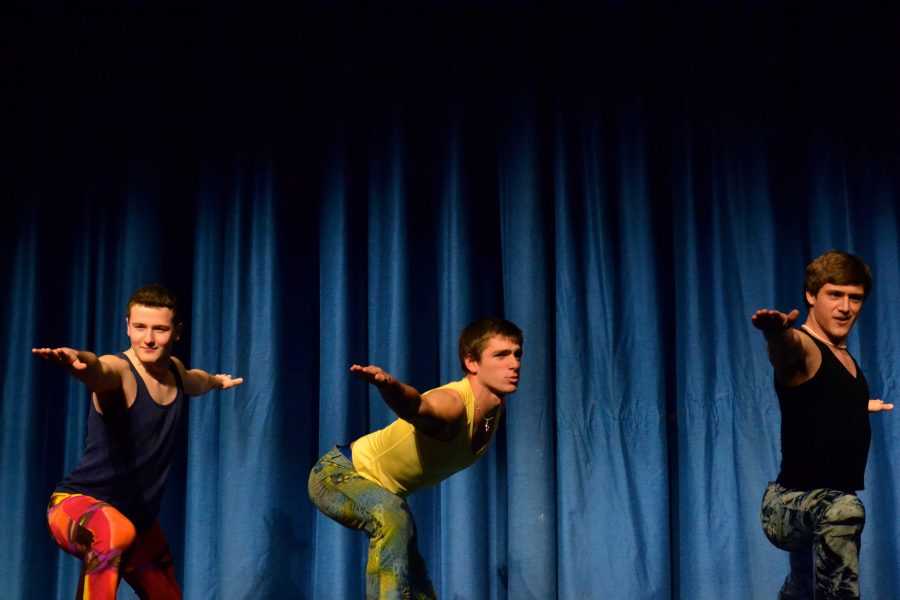 Seniors Elizabeth Meyer and Jenna Kantor, the hosts of the event, announced the dates and organized the bidding. All proceeds including the $5 admission fee and money spent on dates will be donated to the Leukemia & Lymphoma Society.

Senior Maisy Deans, head of the Guy Auction committee, said she was pleased with how the event turned out.

“I think it went really well—it was a lot more successful than I thought it was going to be, which is really exciting,” she said. “My favorite part was hearing all the date ideas. They were so creative and that’s really fun.”

As girls bid competitively for each group of boys, the boys performed various skits advertising their date.

Seniors Harrison Holt, Grant Payette and Jeff Marr, who plan to take three ladies to hot yoga and lunch, sported colorful yoga pants and tank tops while striking a seductive tree pose. The group sold for $750, the most expensive date of the evening.

Another crowd favorite was seniors Simon Amat, Kourosh Ashtary-Yadzi and Jorge Richardson who advertised a skiing or snowboarding date by skiing down the aisles of the auditorium.

Senior Abraar Ahmad said that although he was a little nervous beforehand, he enjoyed being in the auction.

“Definitely watching the other guys do their skits got me really hyped to go on stage,” he said. “Getting out there and people wooing at us was pretty fun.”

Ahmad and his co-date senior Ali Bell sold for $400 for a date to indoor trampoline gym Rebounderz.

Senior Rolanda Wang went to the event not because she planned to bid on any boys, but because she enjoyed just watching. She described the show as “chaotic, but in a good way.”

Seniors Andrew Barth, Drew Aherne, Jack Storey and Lucas Schoch, who ended up selling for $415, had one of the most dramatic bidding processes of the night. At one point the crowd chanted “sophomores, sophomores!” to encourage a bidding war between a group of sophomore girls and a group of junior girls. For their skit, the boys played beach volleyball on stage and threw bananas into the crowd.

Payette said his favorite part about being in such an amusing auction was the reactions from the audience as he and his group advertised their hot yoga date. He said he enjoyed contributing to such a charitable event.