The Black and White • January 26, 2014 • https://theblackandwhite.net/35975/feature/junior-mckenna-murray-wins-whitman-idol-sophomore-runner-up/ 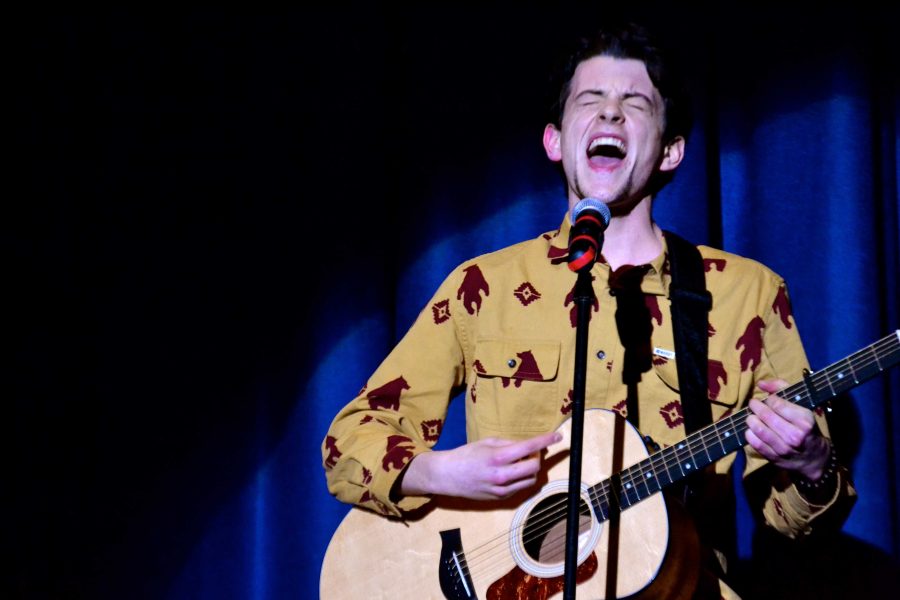 Junior Lucas Weals performs "In the Curve" by The Avett Brothers. Weals was one of 12 students who participated in Whitman Idol Friday night.

Even though Randy Jackson, Paula Abdul and Simon Cowell were nowhere to be seen, Whitman Idol proved to be both entertaining and suspenseful.

Despite fierce competition, junior Mckenna Murray earned the title of this year’s Whitman Idol with her performance of “Low Road” by Grace Potter. Sophomore Haley Hanford was the runner-up.

The show, the first event of the Leukemia and Lymphoma Society month, took place Friday at 7 p.m.  Seniors Libby Collett and Kourosh Ashtary-Yazdi hosted the show in which 12 students competed for the famed title.

Admission was $5, and all proceeds went to the LLS.

SGA advisor Sheryl Freedman said Whitman Idol has been occurring for about nine years, and that its main purpose is to raise money for charity.

“The goal is just to provide a fun evening for people to come listen to some great talent, and to raise money for a great cause in the process,” Freedman said.

Director  Sydney Wolstein, a senior, said that in spite of schedule complications due to snow days, the show was still a success.

“Despite all the little hiccups it went really well and we’re really happy with how it turned out,” she said.

The audience, which was constantly cheering and clapping along to the songs, definitely couldn’t tell that there had ever been any complications.

“That’s got to be the one word to describe it,” she said.  “It was beautiful.”

Highlights of the show included the start of the show, when all the contestants sang and danced to “What Dreams Are Made Of” by Hilary Duff.  The audience laughed at the judges’ jokes and was impressed by the various acts, such as Aryana Bolourian’s original song “Green Eyes.”

Last year’s Whitman Idol winner senior Katherine Paterson left the audience in awe when she sang “Ordinary People” by John Legend while the votes for each contestant were being counted.

Junior Mckenna Murray said she hadn’t expected to win because of all the talented competition.

“It feels amazing,” she said.  “Singing in front of a huge crowd was pretty nerve-racking but also really awesome.”