The Black and White • October 15, 2013 • https://theblackandwhite.net/34276/feature/junior-records-and-produces-music-composes-own-songs/ 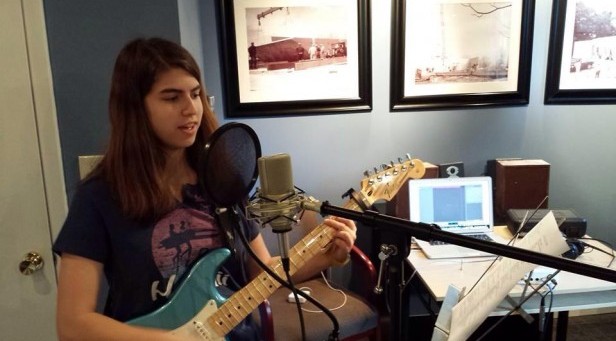 On an average Thursday night, junior Allie Gurland is up for hours writing. But it’s not an English essay she’s toiling over—it’s her new original song entitled “Shine Bright.”

Gurland, an avid music enthusiast and chorus student, began singing her freshmen year. Although she originally took chorus to get her art credit, Gurland decided to chase her newfound interest and continue singing. She even taught herself to play guitar by researching chords online.

While she has never taken voice or guitar lessons, Gurland took a class at American University to learn how to produce music and use recording equipment.

“I was really interested in the behind-the-scenes of the recording process,” she said.

The production class inspired her to buy her own recording equipment and set up a recording studio in her house.

Gurland originally recorded only covers, such as “I’ll Be” by Edwin McCain, which is the first piece she learned how to play on guitar. But Gurland wanted to take the next step and record her own music, she said.

Gurland’s process is not complicated—it just takes time. She usually begins by writing poetry for the lyrics, and then adds chords and a melody.

“There’s no real method that I use,” she said. “I kind of just mix it all together as I go along.”

Once she writes her songs, Gurland records herself singing with guitar to use as a rough draft and template.

She then records only the guitar part while listening to the template in order to get the right timing. Next, she records only the vocals and finally puts the two together on programs such as GarageBand and Audacity.

The process is time-consuming and can be stressful, she said. But the final product is worth the pressure.

Senior Ryan Bennett has asked Gurland to write music for one of his independent study film projects. He came across her music while scrolling through his Facebook newsfeed, and said he both appreciated and enjoyed it.

“The lyrics are incredibly passionate, powerful and uplifting,” Bennett said.

Gurland was nervous to make her song public on Facebook, but said it was worth putting herself in the spotlight.

“I got an overwhelmingly positive reaction to it,” Gurland said. “It makes me not as scared to put more stuff online. It was just the best feeling that people could appreciate something I’d worked so hard on.”