The Black and White • June 13, 2013 • https://theblackandwhite.net/32109/news/sophomore-wins-lead-actress-in-a-musical-at-cappie-awards/

Sophomore wins Lead Actress in a Musical at Cappie awards 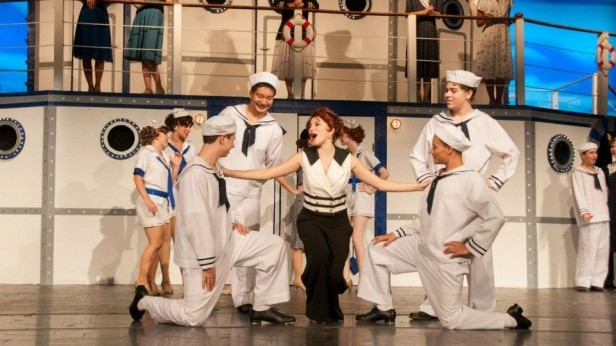 Sophomore Erin Craig, who won Best Lead Actress in a Musical, performs with fellow cast mates in "Anything Goes". The Drama program was nominated for 10 Cappie awards last Sunday.

Sophomore Erin Craig won Lead Actress in a Musical at the awards ceremony for the Critics and Awards Program for High School Theatre last Sunday.

The event, fondly nicknamed the Cappies, was held at the Kennedy Center and consisted of speeches from supporters of the arts, performances of scenes from nominated shows and presentations of awards. Whitman
Drama performed the title number from this year’s musical, “Anything Goes.”

“What I am most proud of is the artistry and professionalism that Whitman students bring to the table,” he said. “They are not only talented but hold integrity.”

Craig, who won Lead Actress in a Musical for her performance of Reno Sweeney and took home the musical’s only award of the evening, said winning was unexpected.

“It felt amazing,” she said. “I couldn’t have done it without my cast and crew.”

Gerken said Craig won the award because of her natural talent and work ethic. She does research and practices a lot, he said.

“Erin Craig is truly a triple threat,” Gerken said. “She can sing, dance and act.”