The Black and White • February 16, 2012 • https://theblackandwhite.net/22767/feature/freshman-band-emerges-victorious-at-battle-of-the-bands/

Freshman band emerges victorious at Battle of the Bands 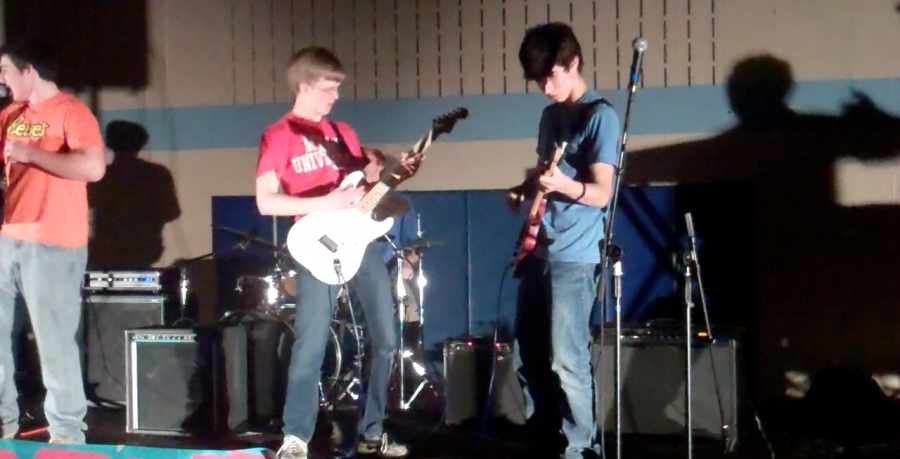 Students perform at Battle of the Bands Feb. 15. The event raised over $1,600 for the Leukemia & Lymphoma Society. Photo by Bailey Hults.

Students exchanged machine guns for drumsticks and army fatigues for jeans and slogan tees during the second annual Battle of the Bands Feb. 15.

The event raised over $1,600 for the Leukemia and Lymphoma Society through admission fees and donations. Members of the audience showed their support for a particular group by dropping donations into that band’s designated bin. At the end of the night, the band whose bin had the most donations won.

Newcomer band Deez Notes earned the night’s highest honors, beating out seven other groups. As freshmen, Jake Parsky, Lucas Weals and Nick Henning kept their expectations low and just tried to enjoy the experience, which made winning even better. They are now looking forward to performing at bRAVE  Feb. 25.

“bRAVE is going to be so much fun,” said Weals, the lead singer. “We’re going to introduce more upbeat dance music.”

Parent Chelle Parsky was thrilled with her son’s success, especially because of the event’s charity aspect.

“It’s a great cause,” she said. “And playing guitar is certainly better than playing video games all day.”

Although many fans originally came out to support their friends, it wasn’t long before they found themselves enjoying the music. Many talented musicians performed, each with their own unique styles, but there is only one SGA president who will rap Notorious B.I.G.: senior Ari Kapner.

“Ari’s band was, without a doubt, the funniest,” junior Aaron Gordon said. “Who knew he could rap?”

“We came out hoping to play a better show than we did last year,” Rankin said.

Dahreddine, the lead singer, said he attempted to escalate the excitement in the room through the band’s music.

“We wanted to change it up a little bit so that our choices weren’t as dull as they were previously,” he said. “It was just more fun.”

Another band, Stereoworld, who performs at the 9:30 Club Feb. 19, hopes to inspire people through their music.  Because each bandmember is from a different country, they cherish the time they get to spend practicing and performing with each other.

“We really appreciate just being together before we all go our separate ways to different places,” said senior Luis von Horoch, the drummer.

Though the competition’s fun, the event’s organizers stressed the ultimate goal of the event. The night’s only real battle is the one against leukemia and lymphoma.

“It’s such a great cause,” SGA treasurer and junior Cindy Wang said. “We’ve had multiple students from Whitman battle cancer — and some have lost — so it’s a much more personal goal for all of us.”