The Black and White • January 16, 2012 • https://theblackandwhite.net/21970/news/bradley-hills-to-receive-two-story-addition-one-of-three-new-construction-projects-in-mcps/ 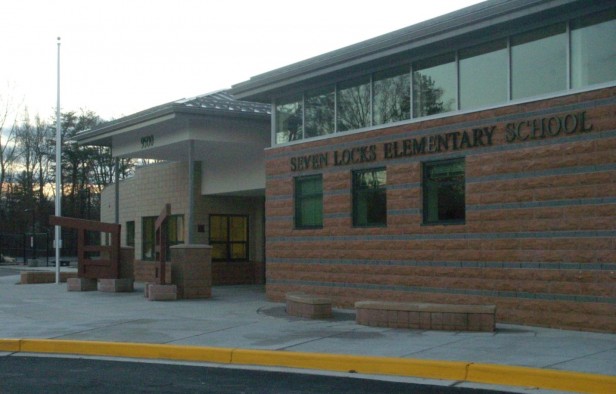 After undergoing a year and a half of construction, Seven Locks Elementary School welcomed back its students Jan. 4. Students from Seven Locks, Photo by Nate Rabner.

The modernization work, part of the MCPS Capital Improvements Plan, includes new rooms, more computers and Promethean boards and eco-friendly features, such as geothermal air conditioning systems and plant-covered vegetative roofs. The three completed projects, which began in summer 2010, cost about $52 million together.

Seven Locks Elementary School was completely demolished and rebuilt. The transition to the new building Jan. 4 went smoothly, and students and staff are benefitting from the larger facility and new electronics, principal Robin Gordon said.

“We had never had Promethean boards before, so that’s completely new for us,” Gordon said.  “We had people working in small offices who didn’t have their own computer, but now, they have it.”

The new Seven Locks building has a few unique features related to its namesake, Locks 8 through 14 on the C&O Canal.  Outdoor structures on either side of the main doors and indoor security gates look like canal lift lock gates.

Modernization work began the first week of January at the three other schools. Weller Road, Glenallan and Bradley Hills were about 60, 140 and 180 students over capacity, respectively, and construction will make room for over 200 extra students at each school, according to an MCPS report.

While the Bradley Hills students are relocated to Radnor Center until fall 2013, their original building will get a two-story addition with 15 classrooms to replace portable classrooms, as well as a new air conditioning system, principal Sandra Reese said.  The main office, media center and all-purpose room will also be expanded.

“The building itself will be more conducive to having more instructional time,” Reese said.  “Moving is stressful and chaotic and all of that, but the benefit of moving is that you get a lot better, so it’s always with an eye to the future that you go through the process.”